In KCR's home turf Gajewal, it's development vs 'unreachable' CM

KCR, popularly known as Rao, is seeking re-election from Gajwel in Siddipet district, after winning with a margin of 20,000 votes in 2014. 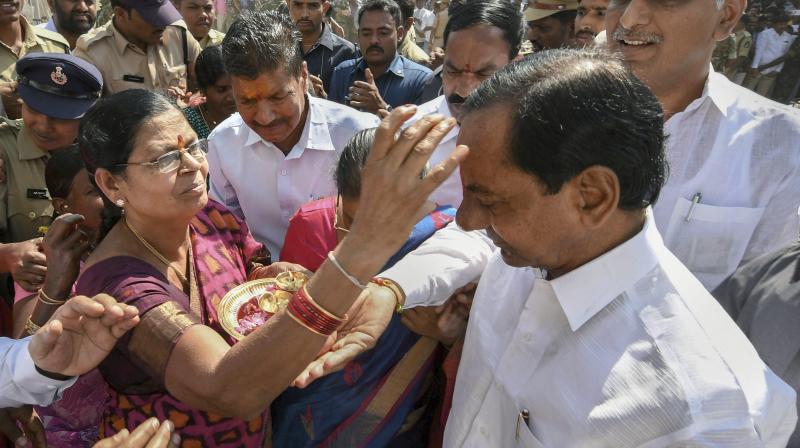 A confident KCR and his party members are heavily relying on the development work and welfare projects undertaken by the government. (Photo: PTI)

Gajwel/Siddipet: With poll campaign at its peak in Telangana, voters in caretaker chief minister K Chandrashekar Rao's home turf Gajwel seem to be divided between the talks of development by the ruling party and Opposition's allegations of an "unreachable" head of the government.

KCR, as Rao is popularly known as, is seeking re-election from Gajwel in Siddipet district, after winning in 2014 with a margin of nearly 20,000 votes. While KCR's supporters go at length to talk about his government's development agenda, many others in the constituency allege they are not able to reach him when in need.

"Development is clearly visible. We have got better roads, regular power supply and more importantly tap water in each house. A lot has been done under the KCR rule. The only minus point is our leader is inaccessible to people," said a guava seller in Pragnapur. He said there is a feeling that the chief minister does not spend "enough time" in his constituency and villagers have to communicate through his representatives to get any work done.

A Vinay, an under-graduate Commerce student in the newly-build kindergarten to post-graduate government campus, said he is not a voter yet, but feels the Congress candidate's availability in the area is much more.

"Our chief minister does not meet us and we feel a distance is growing despite some good work," he added.

At the same time, Ganesh Lagishetty, a tea seller on the Gajwel-Pragnapur road, argued it does not matter whether the chief minister is in the area or not.

"What matters is development and that is happening," he said. Earlier, water was supplied through tankers and now each house has got tap water facility, while overall infrastructure in the area has improved, he added.

A section of Muslim community also appeared happy with the welfare schemes, especially a hike in the government remuneration to 'imams' in mosques, but some are upset over non-implementation of 12 per cent reservation to minorities.

"Many 'imams' are poor and don't have own house to live and have no other source of income. It is a big relief that the TRS government has raised our salary from Rs 1,000 to Rs 5,000," said Mohammud Kumail Ashraf, an imam in one of the biggest mosques in the constituency.

Admitting that KCR maintains distance with people, Ashraf hoped that the TRS government would keep its reservation promise if elected again.

Samiyuddin, who sells fruits in front of the newly-built 'Integrated Market' that would be opened formally after the election, said he believes KCR will come to power again as many feel that the welfare schemes could be stalled if another party wins.

B Ashok, a political science lecturer in a private college, said, "There is 50:50 chance. The youth are disappointed as the TRS government did not provide jobs promised in 2014 polls." Vinay Kumar, a farmer who grows corn and cotton in five acres in Remangooda village, is happy that he has got 45 per cent subsidy to buy a tractor that costs Rs 10 lakh, canal water for irrigation and Rs 4,000 per acre incentive under the Rythu Bandhu scheme for both kharif and rabi seasons.

Promising to cast his vote only for KCR, 60-year-old shepherd Illaya Poushalaya said no government had ever given 21 goats at a subsidised rate.

A confident KCR and his party members are heavily relying on the development work and welfare projects undertaken by the government.

In Gajwel, KCR is up against Vanteru Pratap Reddy, a local strongman who has defected to the Congress from the TDP and has been campaigning ever since the Assembly was dissolved on September 6, months before he was announced as a candidate. Akula Vijaya from the Bharatiya Janata Party (BJP) and S Srinivas from the Bahujan Left Front (BLF) are also in the fray.

Meanwhile, Reddy allegedly attempted to set himself on fire on Monday after a search was conducted at his house in Kompally following a complaint that cash meant for distribution to voters was hidden there.

On the other side, the man tasked with ensuring TRS' win in the constituency is KCR's nephew and one of his most trusted confidantes T Harish Rao, who was also irrigation minister in the last government. Asked if KCR's 'inaccessible' nature will dent his chances of winning the assembly polls, Harish Rao said: "Our opponents in Gajwel have no issue to raise and therefore asking people if chief minister meets people or not. If they claim to be more connected with people, why have not they build roads and given water, power, pension and other basic facilities in their 60 years of regime?"

"What development work have they done by being connected with people and what has not been done by KCR by not being accessible. Let people decide and vote," he said.

Asserting that KCR will get a sweeping majority of over one lakh votes, he said it would be interesting to see if opponents will be able to save their deposits or not. In 2014, the TRS chief had won the seat by a margin of 19,366 votes against Reddy, who had contested on a TDP ticket. It would be interesting to see if vote transfer takes place from TDP to Congress on Reddy's personal charisma.