Moscow said that during a meeting in the UNSC, it reiterated that revocation of Article 370 was India's internal matter. 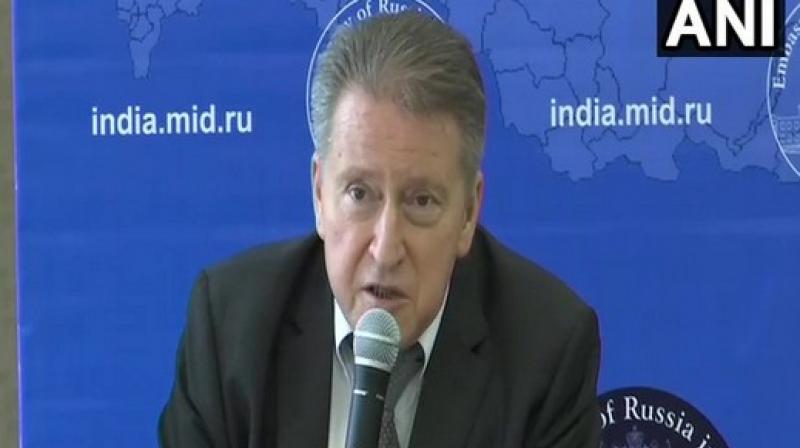 'This is the sovereign decision of the Indian government, it's an internal matter of India,' Russian Envoy to India, Nikolay Kudashev said. (Photo: ANI)

New Delhi: Reiterating that Kashmir issue is to be resolved bilaterally by India and Pakistan, Russia on Wednesday said that it has "no role" to play in the matter unless both the South Asian countries ask for the mediation.

Moscow said that during a meeting in the United Nations Security Council (UNSC), it reiterated that revocation of Article 370 was India's internal matter.

"This is the sovereign decision of the Indian government, it's an internal matter of India. All issues existing between India & Pakistan should be resolved through dialogue on the basis of Shimla agreement & Lahore declaration," said Russian Envoy to India, Nikolay Kudashev, during an event in the capital.

Earlier this month, India had announced its decision to revoke the special status of Jammu and Kashmir and reorganise it into two union territories.

Echoing the similar sentiments, Deputy Chief of Russian Embassy in India, Roman Babushkin, informed that during the closed-door event at the UNSC, Russia reiterated that Kashmir is an internal issue of India.

"Russia has no role to play in India-Pakistan dispute unless both ask for mediation. During the closed-door event at the United Nations Security Council (UNSC), we reiterated that Kashmir is an internal issue of India," said Babushkin.
Following India's decision, Moscow supported New Delhi on multiple platforms. It even asked Pakistan to engage with India to resolve the issue between the two countries.

Pakistan, with the help of China, even approached the United Nations over the issue.

However, the China-Pakistan axis failed at the UNSC closed-door meeting when a majority of the Council members including Russia refused to take up the Kashmir matter and rejected the Chinese position.

China and Pakistan stood isolated as a member after member refused to endorse their position.