Taking a jibe at RJD- family politics, Nitish said the chair is not for rejoicing power but for serving the people. 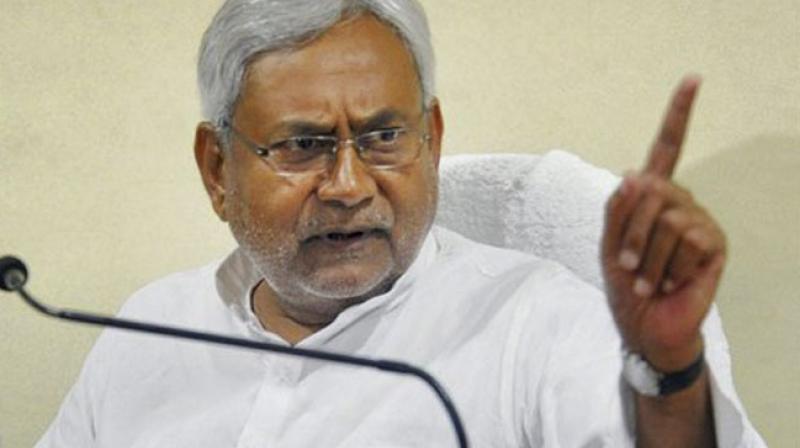 Nitish further said that his government will show a mirror to RJD. (Photo: PTI/File)

Patna (Bihar): After Tejaswi Yadav attacked Bihar Chief Minister Nitish Kumar in the state Legislative Assembly, the latter hit back saying he would not support one who indulges in corruption and accumulates income through wrong means.

Taking a jibe at RJD- family politics, Nitish said the chair is not for rejoicing power but for serving the people.

"We were given a mandate to work. We tried to overcome all the problems by respecting the 'Mahagatbandhan'. You (Tejaswi) were not clarifying on the corruption charges. I had only asked your explanation," Nitish said.

Asserting that his decision to break the alliance with RJD was taken in favour of the state, Nitish said, "This government will work and serve the people of Bihar. We will not tolerate corruption and injustice."

He further said that his government will show a mirror to RJD.

"Secularism is not to hide your corruption and wrongdoings. We will not support the one who will accumulate income through wrong means," Nitish added.

Meanwhile, Deputy Chief Minister Sushil Kumar Modi also trained his guns at the RJD fraction and said, "You call Nitish's decision a disrespect to people's mandate. If you (Tejashwi) had given resignation then we would have not taken this decision."

Venting out his anger against Nitish Kumar earlier in the special session, Tejaswi asked him that did he not feel ashamed sitting next to Sushil Modi.

Tejaswi unleashing a tirade of fiery salvos on Kumar, said that the latter has stitched an alliance with a party who conspired the assassination of Mahatma Gandhi.

"Did you not feel ashamed sitting next to Sushil Kumar Modi? You take out Champaran yatra and then stitch an alliance with a party which assassinated Mahatma Gandhi," said Tejaswi.

Further speaking on the matter of his resignation, Tejaswi said Kumar never asked him to step down from his post and it never occurred to him that the Bihar chief does not want him to be a part of his team.

"Nitish ji never asked me to resign. I also thought that he does not want me to resign. I would like to ask him why he quit the alliance and toppled the government," said Tejaswi.

Tejaswi further said Nitish has betrayed the people of Bihar with his decision.

"People of Bihar have suffered immensely. I am deeply saddened by the Nitish ji resigned. It was all planned," said Tejaswi in assembly.

Meanwhile, Nitish Kumar won the floor test in the Bihar Legislative Assembly with 131 votes in favour and 108 against.