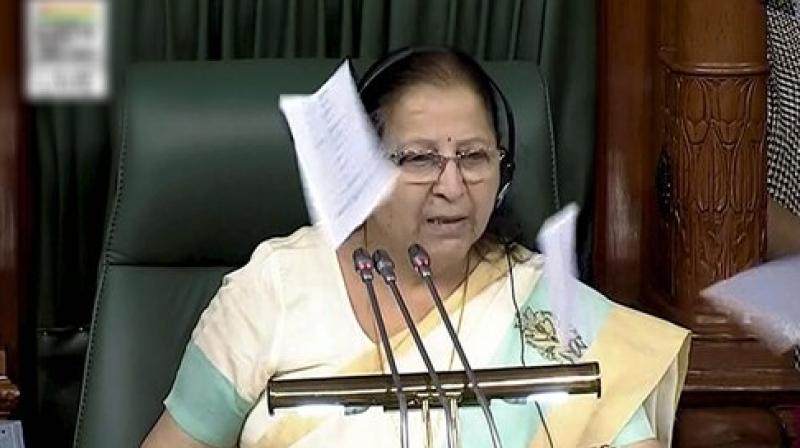 Papers being thrown towards Speaker Sumitra Mahajan in Lok Sabha by Congress MPs.

New Delhi: Heated clashes and verbal exchanges were witnessed in both Houses of Parliament on Thursday between the treasury benches and the Opposition over a range of issues, right from the developments in Bihar to the debate being sought by Congress on lynching incidents, even as the BJP members sought an apology from the Opposition members suspended for throwing papers towards the Speaker Sumitra Mahajan.

Lok Sabha was adjourned twice as Congress members repeatedly requested the Speaker to allow a discussion on incidents of mob lynching. Leader of the Congress Mallikarjun Kharge sought to know from Ms Mahajan as to why no discussion was being held on the sensitive issue despite the Opposition requesting for it since the past two weeks.

In Lok Sabha, even as the Opposition members were engaged with the Speaker over technicalities and rules under which the discussion on mob lynching could be held, parliamentary affairs minister Ananth Kumar sought an apology from Congress members for the “unruly” behaviour of their MPs which led to their suspension. The House was adjourned for 25 minutes just five minutes after it assembled in the morning. Later, it was adjourned at 12.53 pm till 2 pm.

As soon as the Lok Sabha took up the Question Hour, Jai Prakash Narayan Yadav (RJD) raised the issue of JD(U) leader Nitish Kumar leaving the “grand alliance” and forming a new government with the BJP.

Shouting from his bench in the front row, he dubbed it as “murder of democracy.”

Meanwhile, Congress members trooped into the well of the House, demanding revocation of the suspension of six of its members.

They carried placards which read: “End discrimination, give justice madam Speaker” and “take back suspension (of six party MPs).”

When the House re-convened after the first adjournment, members of the Congress and the Trinamool Congress continued with sloganeering, demanding discussion on lynching of people by cow vigilantes.

As the Opposition members ignored Ms Mahajan’s request, she told the protesting members that they were disturbing the proceedings of the House.