India   Politics  28 May 2019  Will welcome if they dissolve Karnataka Assembly: Yeddyruappa
India, Politics

Will welcome if they dissolve Karnataka Assembly: Yeddyruappa

Yeddyurappa also said that he is going to Delhi for the oath-taking ceremony of Prime Minister Narendra Modi. 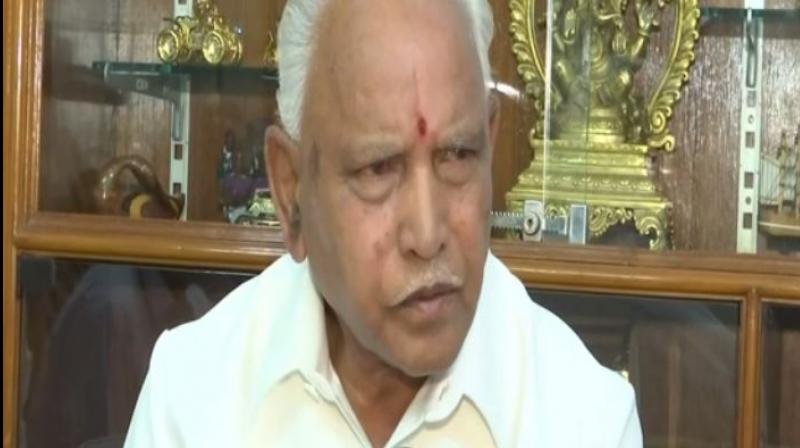 Karnataka BJP chief B S Yeddyurappa on Tuesday said that if the Congress-JD(S) coalition decides to dissolve the state Assembly, he will welcome their decision. (Photo: File)

Bengaluru: Buoyed by the party's resounding victory in the Lok Sabha elections, former chief minister and Karnataka BJP chief B S Yeddyurappa on Tuesday said that if the Congress-JD(S) coalition decides to dissolve the state Assembly, he will welcome their decision.

"We have won 25 out of 28 Lok Sabha seats in Karnataka. This is a historic win. I will welcome the decision if they (the ruling alliance) dissolve the government and go for mid-term polls," he told reporters here.

Resentment among the leaders of coalition came to the fore after the Congress-JD(S) coalition failed miserably in the Lok Sabha elections, managing to get only two parliamentary seats in the state.

On Monday, senior Congress leader K N Rajanna had said, "This government will not remain in power as it will collapse after June 10. I have been told that he must have lost his post even before but as per my sources, BJP people in the state stopped till the Prime Minister takes the oath."

Speaking further, state BJP chief said, "No BJP MLA is in touch with Congress or JDS. We are all together. I don't want to speculate on forming the government. Things will happen on its own."

On May 14, Yeddyurappa had said, "Not a single person from BJP will join any other party. After May 23, more than 20 Congress MLAs who are not happy with HD Kumaraswamy will not continue in the party."

However, the MLAs clarified that they visited Krishna's residence to greet him for the success of BJP in the recently-held polls, adding that there was "nothing political" about the meeting.

"We oppose the FIR against Vishweshwar Bhat. JD(S) is trying to curtail freedom of expression. We are in full support of Vishwavani," BJP leader said.

The FIR was registered on a complaint filed by General Secretary of the Legal Cell of Janata Dal (Secular) Pradeep Kumar S.P. here on Sunday.

The complainant stated that the news item on an alleged heated conversation between Nikhil, who recently lost Mandya Lok Sabha constituency, and his grandfather— JD(S) party supremo H.D. Deve Gowda, was meant to tarnish Nikhil's political career and to extract money.

Yeddyurappa also said that he is going to Delhi for the oath-taking ceremony of Prime Minister Narendra Modi.

In Karnataka, BJP is the single largest party with 105 members in the 225 member assembly, while the ruling coalition has 117 members with 79 legislators from Congress, 37 from JD(S) and 1 from BSP.

The JD(S)-Congress coalition which is in power in the state went through a rough patch during the campaigning of the recently held elections with leaders of both the parties accusing each other.