India   Politics  28 May 2019  ‘No reshuffle, only filling up of 3 vacant posts’: Siddaramaiah
India, Politics

‘No reshuffle, only filling up of 3 vacant posts’: Siddaramaiah

In an attempt to save his govt, Kumaraswamy has swung into action and is trying to pacify some disgruntled Congress legislators personally. 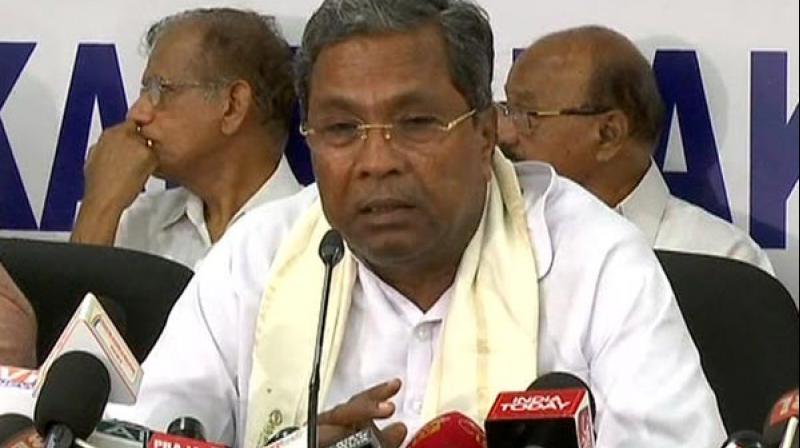 Bengaluru: Amid reports that Karnataka Chief Minister H D Kumaraswamy will reshuffle his cabinet to save the coalition government, the JD(S)-Congress Coordination Committee chief Siddaramaiah on Tuesday said it would only be an expansion to fill three vacant posts.

"No reshuffle, it is a kind of expansion. Three (posts) are vacant. There is plan to fill them," Siddaramaiah told reporters in Mysuru.

The Karnataka cabinet which met on Friday after the coalition's rout in the Lok Sabha polls, had discussed the issue, which may also come up at the Congress Legislature Party meeting on Wednesday and AICC General Secretary K C Venugopal's meeting with Congress ministers this evening.

Out of 34 ministers, Congress and JD(S) have 22 and 12 respectively according to the coalition understanding. Currently, three posts are vacant, two from JD(S) and one from Congress.

Amid simmering discontent within the Congress, coalition leaders fear the BJP, spurred by the Lok Sabha poll outcome in which it bagged 25 of the 28 seats in the state, may poach some MLAs.

Jarkiholi, who has been hobnobbing with the BJP for some time, had threatened to resign from the party along with some MLAs after the Lok Sabha polls.

The BJP had predicted the collapse of the coalition and increase in its tally in the assembly after the LS poll results, claiming that 20-odd Congress MLAs were unhappy and may take any decision anytime. Coalition partners Congress and JD(S) managed to win one seat each in the Lok Sabha polls.

In an attempt to save his government, Kumaraswamy has swung into action and is trying to pacify some disgruntled Congress legislators personally.

The Chief Minister on Monday had met Jarkiholi's confidant and Athani MLA Mahesh Kumathalli, and is said to have promised to look into their issues, including Jarkiholi's induction into the cabinet.