Lok Sabha constituencies of Kairan, Bhandara-Gondiya, and Palghar to go to polls today. 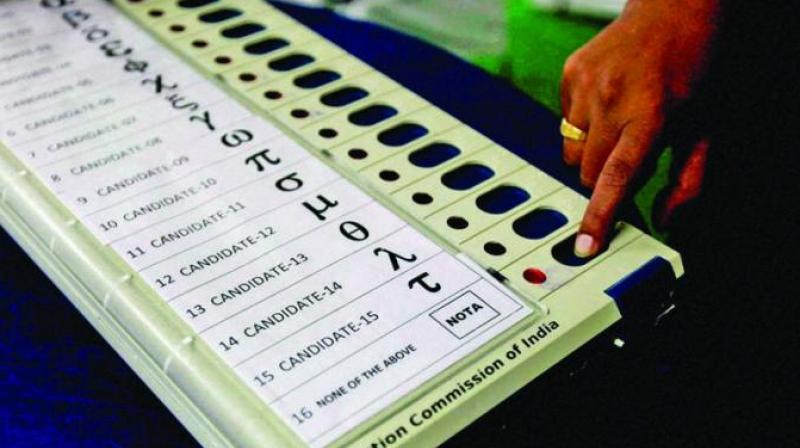 The bypoll in Palghar was necessitated due to the death of sitting BJP MP Chintaman Wanaga in January this year. (Representational image)

New Delhi: The stage is set for bypolls to four Lok Sabha seats, including the politically-crucial Kairana in Uttar Pradesh, and 10 assembly constituencies spread across 10 states on Monday.

Besides Kairana in western Uttar Pradesh, byelection will be held in Bhandara-Gondiya and Palghar parliamentary constituencies in Maharashtra, and Nagaland Lok Sabha seat.

The Kairana bypoll will see a joint opposition taking on the ruling BJP.

The constituency fell vacant after the death of BJP MP Hukum Singh, whose daughter Mriganka Singh is now the party’s candidate for the bypoll. She is fighting Rashtriya Lok Dal’s (RLD) Tabassum Hasan, who is supported by the Congress, Samajwadi Party and the Bahujan Samaj Party.

The opposition hopes that by consolidating anti-BJP votes, they will repeat the success of the Gorakhpur and Phulpur Lok Sabha by-elections, where the ruling party suffered an unexpected defeat.  The ruling BJP, on the other hand, is making extra efforts to retain the seat to try and send a strong message to voters, party cadres as well as the opposition parties — that the drubbing in the Gorakhpur and Phulpur bye-elections was an aberration, and that it was still strong in western UP.

All four major parties in Maharashtra — the Congress, BJP , Shiv Sena and the NCP — have pulled out all stops for the Lok Sabha bypolls as the outcome is likely to have a bearing on their future course. The Shiv Sena has fielded late BJP MP Chintaman Wanaga’s son Shriniwas Wanaga in Palghar, much to the dislike of the BJP which has in-turn nominated Congress deserter Rajendra Gavit.

The bypoll in Palghar was necessitated due to the death of sitting BJP MP Chintaman Wanaga in January this year.

In Bhandra-Gondia, Nana Patole quit as the BJP MP and resigned from the ruling party to return to Congress earlier this year, necessitating by-election.