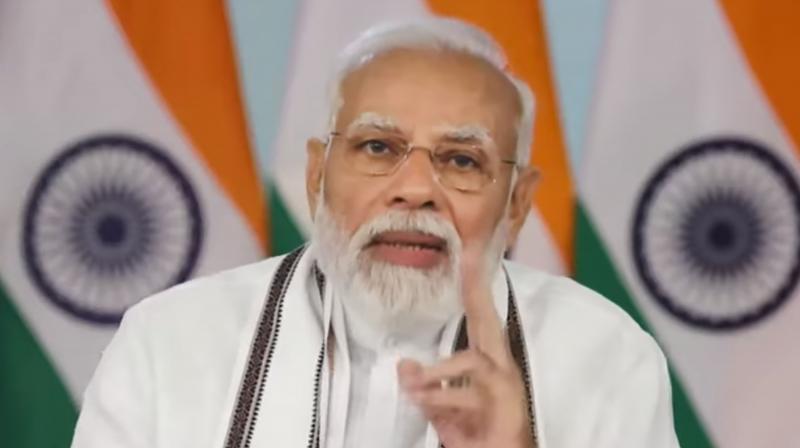 Prime Minister Narendra Modi speaks during his meeting with Chief Ministers regarding the Covid-19 situation across the nation through a video conference, in New Delhi. (PTI Photo)

New Delhi: Prime Minister Narendra Modi urged all state governments to reduce the Value Added Tax (VAT) on fuel “in the spirit of cooperative federalism” during his video conference with state chief ministers on Wednesday, particularly targeting those run by the Opposition parties.

Quoting fuel prices in cities across India, Modi noted that all those states that had lowered VAT have lower fuel prices. This is the first time that the PM has spoken on the fuel price despite the Opposition demanding a statement from him during the recent Budget Session.

The Opposition rejected the PM’s suggestions, saying it was the Centre that had raised fuel prices and the onus was on it to provide relief to citizens. The Congress even sought fuel subsidies as were given during Dr Manmohan Singh’s UPA government.

Taking a dig at the Opposition-ruled states, Modi, during his online meeting with the CMs to review the Covid-19 situation, said that six states — Tamil Nadu, Kerala, West Bengal, Telangana, Maharashtra and Jharkhand — had not cut VAT on petrol and diesel.

The PM said that to reduce the load of high fuel prices, the Centre had cut excise duty and requested the states to reduce taxes. “Some states cut taxes but some did not, leading to higher cost of petrol and diesel. This is not only injustice towards the people of the state but harms neighbouring states too,” he said.  The PM cited the example of Karnataka and Gujarat, both ruled by the BJP, saying they had suffered a revenue loss of nearly Rs 5,000 crore and Rs 3,500-4,000 crore respectively by reducing VAT but they did so to help people, while their neighbouring states had earned revenue by not reducing taxes. Modi said that in November a request was made to cut VAT but states like Maharashtra, West Bengal, Telangana, AP, Tamil Nadu, Kerala and Jharkhand did not do so. The PM said 42 per cent of the revenue at the Centre goes to state governments. “I would not go into how much revenue these states gained. But now I am urging you that in the interests of the nation, please undertake what should have been done six months back in November. Give consumers in your state the benefit by lowering VAT… I urge all states to work as a team in this time of global crisis following the spirit of cooperative federalism”, the PM said.

However, Kerala and West Bengal rejected the PM's suggestions. Kerala finance minister K.N. Balagopal said the state government had no intention of slashing sales tax on petrol and diesel. “We have not increased sales tax for the last six years. Therefore, there is nothing to decrease,” he said. Mr Balagopal termed the PM’s statement “highly misleading”. He said: “After coming to power, the LDF government had decreased the sales tax on fuel once, but we never increased it.”

West Bengal CM Mamata Banerjee accused Mr Modi of “misleading” the country with his “one-sided” speech. Attacking Mr Modi, Ms Banerjee alleged: “The PM passed the buck of fuel price hikes on to the states. It implies that the states have to reduce it. But how will they do it? It is you who hiked it. Did you ever notice how much you earned? What you told the citizens of the country is one-sided and misleading. This is not right. You appreciated five BJP-ruled states. You provide them a lot of funds, much higher than what we get in several schemes.

It is almost 50 per cent more. So, a payment of Rs 4,000 crores is not a big deal for them because you send them Rs 40,000 crores in return.” The Trinamul Congress supremo told Modi: “You took the names of many other states. In the case of our state, you must know we have been providing a concession of Re 1 per litre of petrol for the last three years. Rs 1,500 crores alone was spent by our government on this account. You argued that all states should give it while you will only take it. We have Rs 97,000 crores as dues from the Centre. You are yet to pay it. If you pay even half of it, I will send you Rs 3,000 crores the next day.”

She added: “Right now the Government of India is taxing 25 per cent more than the West Bengal government on petrol. We always want the tax collection should be shared 50:50 between the states and the Centre. But the Centre did not agree with us. It takes away 75 per cent. You have been PM since 2014. Since September 2021 you have earned a revenue of Rs 17,31,242 crores on petrol and diesel.”

“Petrol-diesel prices were spoken about in the meeting (with the PM). But Maharashtra pays the highest tax. Prices of LPG have been slashed,” said Maharashtra minister Rajesh Tope.

Maharashtra CM Uddhav Thackeray tried to shift the blame to the Centre for the sharp rise in petrol and diesel prices. “Today, the diesel tax share on a litre of diesel in Mumbai is Rs 24.38 for the Centre and Rs 22.37 for the state. The petrol tax share is Rs 31.58 as Central tax and Rs 32.55 as state tax. Therefore, it is not a fact that the prices have become more expensive due to the states. To provide relief to the citizens of the state, the state government has already given tax relief in respect of natural gas. To promote the use of natural gas, the rate of VAT on this gas was reduced from 13.5 per cent to three per cent,” a statement by the Maharashtra CM’s Office said.