SC to hear sedition law petitions on May 5 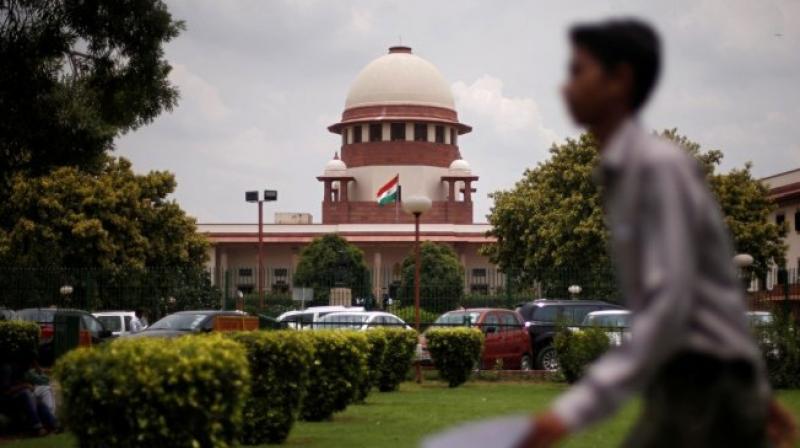 New Delhi: The Supreme Court on Wednesday gave the Centre time till this weekend to state its position on a batch of petitions challenging the constitutionality of the colonial-era sedition law -- Section 124A of the Indian Penal Code -- that has been repeatedly invoked to curb dissent in recent times and posted the matter for final hearing on May 5, making it clear that no request for adjournment will be entertained.

A bench comprising Chief Justice N.V. Ramana, and including Justices Surya Kant and Hima Kohli, granted time to the Centre to file its reply by the weekend after solicitor-general Tushar Mehta, appearing for the Centre, sought two days to file a reply. Mr Mehta told the court the Central government’s affidavit was ready, but some changes are required to be made and will be filed within two days.

The court in its order said: “Solicitor-general sought two days to file the reply. We direct the Centre to file a reply by the end of this week. The reply (by petitioners) to that (Centre’s) affidavit to be filed by Tuesday. List the matter for final disposal without any adjournment on May 5.”

Earlier, on July 15, 2021, the court had issued notice to the Centre on the plea by Maj. Gen. S.G. Vombatkere (Retd), journalists Patricia Mukhim and Kashmir Times editor Anuradha Bhasin, and the People’s Union for Civil Liberties (PUCL), challenging the constitutional validity of the sedition law. Section 124A of the IPC has also been challenged by others.

Seeking the assistance of attorney-general K.K. Venugopal at the last hearing on this on July 15, 2021, Chief Justice N.V. Ramana, heading a bench that then comprised Justices A.S. Bopanna and Hrishikesh Roy, had described Section 124A IPC as a colonial-era law that was meant to suppress the freedom movement, and was used by the British against Mahatma Gandhi, Bal Gangadhar Tilak and others.

Chief Justice Ramana had said people are “scared” over the sedition law being invoked against them for speaking their mind or against the acts of the authorities. It voiced concern over the widespread misuse of the law, saying: “The situation on the ground is grave... If one party does not like what the other is saying, Section 124A is used... It is a serious threat to the functioning of individuals and parties.”

CJI Ramana had further said: “If a police officer wants to fix anybody in a village for something, he can use Section 124A... People are scared.”

The court at the last hearing wondered that when the Narendra Modi government was engaged in repealing archaic and obsolete laws, then why was the sedition law still retained. The CJI told Mr Venugopal: “Your government has repealed many stale laws. I do not know why is your government not looking into repealing Section 124A of the IPC?”

Sensing the mood of the court, Mr Venugopal suggested that instead of striking down the law, the court may frame guidelines so that Section 124A IPC meets its legal purpose.