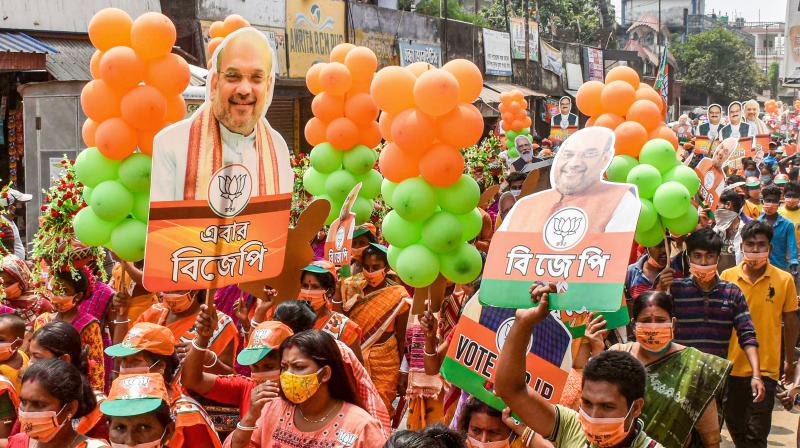 New Delhi: It is perhaps too little, too late. After being severely castigated by the Madras and Calcutta high courts over the second wave of Covid-19, the Election Commission on Tuesday banned all victory rallies by political parties and candidates after the Assembly election results are declared on or after May 2.

After being reprimanded by the courts, the EC, which had ordered an unprecedented eight-phase election in West Bengal, said: “No victory procession after the counting on 2.5.2021 shall be permissible. Not more than two persons shall be allowed to accompany the winning candidate or his/her authorised representative receive the certificate of election from the returning officer concerned.”

The eighth and last phase of the West Bengal election will be held on Thursday, April 29. Voting is already over in Assam, Tamil Nadu and Kerala, and the Union territory of Puducherry.

On Monday, the Madras high court in a stinging remark had said the EC “should be put up on murder charges… for being the most irresponsible institution”. The Madras high court also said it would “stop the counting if we do not find before May 2 a blueprint on how proper maintenance of Covid protocols will be maintained so that this state does not succumb to your idiosyncracies any further…” The EC has been directed to submit a detailed report to the high court on April 30.

A survey conducted by an English-language television news channel on Tuesday showed the steep spike in Covid-19 cases in the poll-bound states. In Kerala, the Covid cases had gone up by 130 per cent, while in Tamil Nadu it was by 56 percent. The channel claimed the cases had shot up by 215 per cent in Assam, while it was 86 per cent in West Bengal. In Uttar Pradesh, following the recent Kumbh Mela, the Covid-19 cases had seen a staggering rise of 47 per cent. At this point, India is reporting well over three lakh Covid cases and over 2,000 deaths a day.

While Covid protocols were thrown out of the window, as supporters thronged in their thousands to cheer their leaders, the EC remained a mute spectator. Even as four candidates succumbed to Covid in West Bengal, the election mania went on unperturbed. A couple of days back, the TMC filed a complaint against BJP leaders Dilip Ghosh and actor-politician Mithun Chakraborty for holding rallies attended by over 500 people, which was the limit set by the EC in its Covid protocols. In fact, the Opposition parties had raised eyebrows over this particular EC figure of 500 people. It was alleged the EC came up with the 500 figure only after the BJP claimed it would restrict its rallies to 500 people.