Modi said that Pakistan applauds the language of opposition. 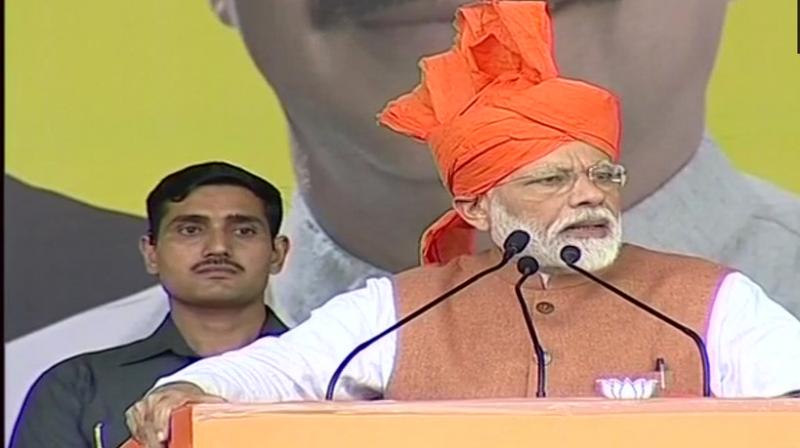 Modi blamed Cong, NC, PDP for the problems that the people of the valley are facing today. (File: ANI)

Akhnoor: Prime Minister Narendra Modi on Thursday while addressing a political rally in Jammu and Kashmir's Akhnoor, blamed Congress, National Conference (NC) and Peoples Democratic Party (PDP) for the problems that the people of the valley are facing today.

Modi said, "It is because of them (Congress, NC and PDP) that Kashmiri Pandits faced so much trouble. Sadly, national security is not a priority for them, they only care about power."

Commenting on the language of opposition, Modi said that Pakistan applauds such voice.

"The whole country is talking in one voice and these Congress people are talking in a different voice. Do you accept this language of Congress? Of PDP? of NC? Pakistan applauds their language," said Modi.

Prime Minister on Thursday flagged off its Lok Sabha polls campaign from Uttar Pradesh's Meerut, then proceeded to Rudrapur (Uttarakhand) and finally concluded the day's schedule with Jammu and Kashmir's Akhnoor.

Modi at Meerut Praised BJP-led NDA government’s achievement, Modi said be it land, air or space his government has shown its mettle. “We showed the courage to carry out surgical strikes.”

Read: ‘BJP govt showed courage for surgical strikes in all spheres,’ says Modi in UP

In his second public rally in Uttarakhand’s Rudrapur Modi lashed out at the previous UPA-led government for the delays in acquiring military hardware, claiming that the party was more focused on “commissions” from defence deals.

Read: Is it right to abuse our Army Chief? PM slams Oppn in 2nd rally in U’khand