Singh, here to participate in a condolence meeting held in the memory of Parrikar. 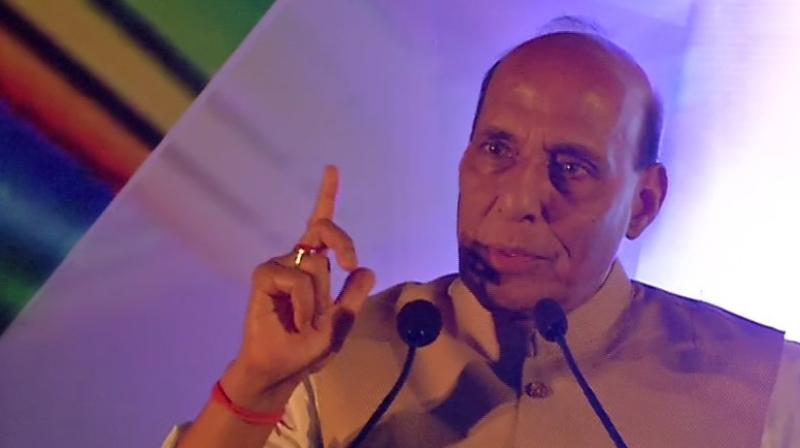 Singh recalled Parrikar's contribution to the One Rank One Pension scheme, induction of Light Combat Aircraft Tejas in the Indian Air Force and getting on track the Rafale fighter jet deal with France. (Image: ANI)

Panaji: Union Home Minister Rajnath Singh Thursday said the then Defence Minister Manohar Parrikar was extremely upset and angry after the 2016 Uri terror attack that had claimed the lives of 17 jawans. Singh, here to participate in a condolence meeting held in the memory of Parrikar, who died on March 17, narrated his experience about working with his former Cabinet colleague and shared anecdotes. "After the Uri terror attack (on September 18, 2016), we were called by PM. I was with Parrikar in that meeting. Parrikar was extremely upset and angry over the incident," Singh said. "He had also played a major role in the air strike.

He monitored the operation throughout night. He played an important role in two air strikes," the Union minister said. Paying glowing tributes to Parrikar, he said the late Goa Chief Minister had sensed the mood of the country before recommending Narendra Modi's name as the BJP's prime ministerial candidate during the party's National Executive meeting here in 2013. "When the National Executive took place in 2013, I was president of the party (BJP). After receiving me at the airport in Goa, when we sat over tea, he told me that mood of the country was in favour of Narendra Modi becoming the next Prime Minister," Singh said.

Singh recalled Parrikar's contribution to the One Rank One Pension scheme, induction of Light Combat Aircraft Tejas in the Indian Air Force and getting on track the Rafale fighter jet deal with France. "I still remember that Rafale was not coming to India. We were concerned that we didn't have next generation fighter plane. The PM gave him the responsibility.

"In 2015, an agreement was signed with the French Defence Minister. Parrikar played a role in getting the Rafale deal back on track," Singh added. Speaking on the occasion, Goa's Deputy Chief Minister Vijai Sardesai said running the BJP-led government in the state without Parrikar is going to be a challenge for the ruling coalition. However, the ruling coalition will face this challenge together, said Sardesai, who heads the Goa Forward Party (GFP), a BJP ally in the state. Sardesai said his party had resolved to support the BJP in government formation after the 2017 Assembly polls only if Parrikar, then the Defence Minister, was made the chief minister.

"We have to try to create more Parrikars and to do so we need more foresight. He was the one who had foresight. He was the one who proposed the name of Narendra Modi as Prime Ministerial candidate," the Deputy Chief Minister said. Sardesai said giving a stable government to Goa will be a fitting tribute to Parrikar. "I am sure the government has gone into another phase after the demise of Parrikar. It is not going to be easy without Parrikar.

"It is going to be a challenge and we are going to face it together. Giving a good and stable government is the biggest tribute we can give to Parrikar," he said. Sardesai said even before the 2017 elections, he had decided to support a BJP-led government only if it is headed by Parrikar.

"We had decided even before elections and had given him assurance that we will form the government if he returns to state politics and heads the coalition," Sardesai said. The BJP had won 13 assembly seats and it formed the government under Parrikar with support from the GFP, MGP and Independents. Sardesai said he had given word to Parrikar to continue in the government. "I have kept my word," he added. Goa Governor Mridula Sinha and senior RSS leader Bhaiyyaji Joshi, among others, were present at the condolence meeting.