Azad, who had for long been associated with the BJP, was inducted into the Congress in New Delhi. 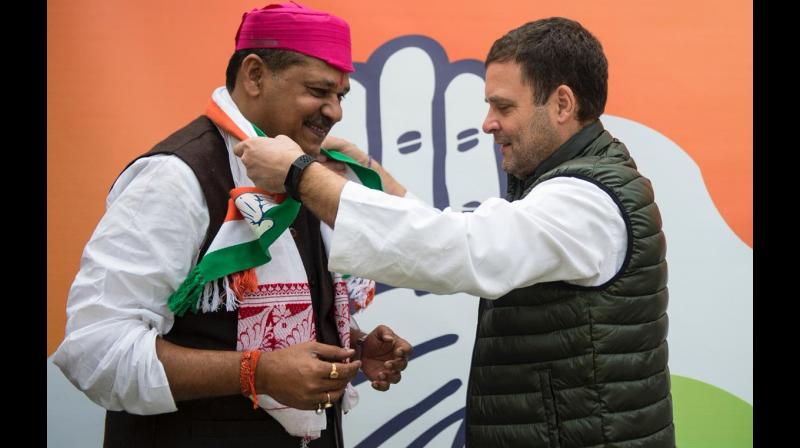 Patna: The opposition Grand Alliance in Bihar Thursday appeared to be heading towards a crisis, with a number of Congress leaders claiming the party was "not getting a fair deal" in seat-sharing arrangement and urged the high command to step in before it was too late. Former test cricketer Kirti Azad, who joined the Congress recently, said he would request the party leadership to take "decisive" measures.

"It is indeed very demoralising for the entire party, not just the prospective candidate, if one does not get a chance to contest one's sitting seat. I would urge the top Congress leadership to think clearly and take some decisive steps," the sitting MP of Darbhanga said. The cricketer-turned-politician has been mortified with the arm-twisting by Rashtriya Janata Dal (RJD), the major alliance partner in the Grand Alliance which is insisting on contesting the Darbhanga seat. Azad, who had for long been associated with the BJP, was inducted into the Congress in New Delhi by party chief Rahul Gandhi with much fanfare.

Photographs of the duo donning traditional 'Mithila paag' (headgear) splashed across newspapers the following day, indicating that Azad's candidature from Darbhanga as 'Mahagathbandhan' candidate was certain. Son of former Bihar chief minister Bhagwat Jha Azad, Kirti Azad belongs to Maithil Brahmin community - who are traditional supporters of the Congress but have in the recent past inclined towards the BJP. The RJD, which lost the seat by a thin margin in 2014, is pushing the candidature of its senior leader Abdul Bari Siddiqui from Darbhanga, citing the sizeable Muslim population in the constituency.

Under the seat-sharing arrangement in the Grand Alliance, the RJD will field candidates in 20 seats, Congress in nine, Hindustani Awam Morcha (HAM) in three, Rashtriya Lok Samata Party (RLSP) in five, Vikassheel Insan Party (VIP) in three and the Communist Party of India (CPI) on one seat. Echoing Azad's views, Supaul MP Ranjeet Ranjan said, "A strong message must be sent across that we are no pushovers. I would urge the high command to take a decision which could prevent the morale of our workers from sagging." Ranjan has also been baffled by the threat issued by Supaul district RJD chief and MLA Yaduvansh Kumar Yadav on Wednesday that he would put up a candidate against the sitting Congress MP "without caring about any disciplinary action" by his party. Ranjeet Ranjan is the wife of Pappu Yadav. Pappu Yadav had won the seat of Madhepura in 2014 as an RJD candidate, but was expelled by party supremo Lalu Prasad a year later.

He subsequently floated his own outfit Jan Adhikar Party (JAP) and had for long been trying for inclusion in the Grand Alliance, heaping praise on the Congress and Lalu Prasad-led RJD. The RJD has, however, announced that it would be fielding veteran socialist leader Sharad Yadav from Madhepura. He had lost to Pappu Yadav five years ago when the former fought as a Janata Dal (United) candidate.

Stung by the rebuff, Pappu Yadav alleged that Prasad's younger son and heir apparent Tejashwi Yadav was "insecure of people like me and Kanhaiya Kumar". The JAP founder also said that he saw potential in Kanhaiya Kumar. Kanhaiya Kumar, who is set to make his electoral debut from Begusarai against BJP's Giriraj Singh as a CPI candidate, recently reciprocated Pappu Yadav's gesture by effusively thanking JAP workers for their support. The former JNU students union leader also indirectly backed the sitting Madhepura MP's claim for re-election, saying "one who toils must get the mehnatana (wages)". Meanwhile, Congress state unit working president Kaukab Qadri also said that the party was getting a raw deal in the state. "We have undeniably been given a raw deal in the first two phases. We were deprived of a chance to contest Aurangabad, which was given to a nondescript outfit like HAM led by former chief minister Jitan Ram Manjhi," he told PTI.

"As per the tentative arrangements for the remaining seats, we will be getting none except Sasaram in south Bihar. I have, therefore, urged the party high command to push for my candidature from Karakat. "It includes the region to which I belong and has a sizeable population of minorities and upper castes who feel ditched by the BJP," Qadri explained. When pointed out that Karakat was the sitting seat of RLSP chief Upendra Kushwaha, he said, "We were coerced into giving up Aurangabad, which is adjacent to Karakat and where we had a strong candidate in former MP Nikhil Kumar. "The seat went to Upendra Prasad, a Kushwaha leader from Manjhi's party. It would send a very wrong signal if two Kushwahas get tickets from two adjacent seats.

The RLSP chief has been allocated five seats, far in excess of his political heft," the Congress leader said. Congress MLAs Ajeet Sharma, Dheeraj Kumar Singh 'Tunna' and Ramdev Rai echoed similar sentiments. Bihar Pradesh Congress Committee chief Madan Mohan Jha, who rushed to Delhi Wednesday night, is likely to thrash out the issue with Congress president Rahul Gandhi. Meanwhile, sensing trouble, Tejashwi Yadav has cancelled his rallies in Jamui, Banka and Katihar Lok Sabha segments, though party sources claimed it was because of his ill-health. The opposition Grand Alliance comprising the RJD, Congress, RLSP, HAM (S) and former Bollywood set designer Mukesh Sahni's VIP has announced the names of nine candidates so far. Elections to the 40 Lok Sabha seats in Bihar will be held in seen phases between April 11 and May 19.