‘Either govt gives us 5 pc reservation in 11 days or there will be agitation,’ said man behind ‘mahapanchayat’, Kirori Singh Bainsla. 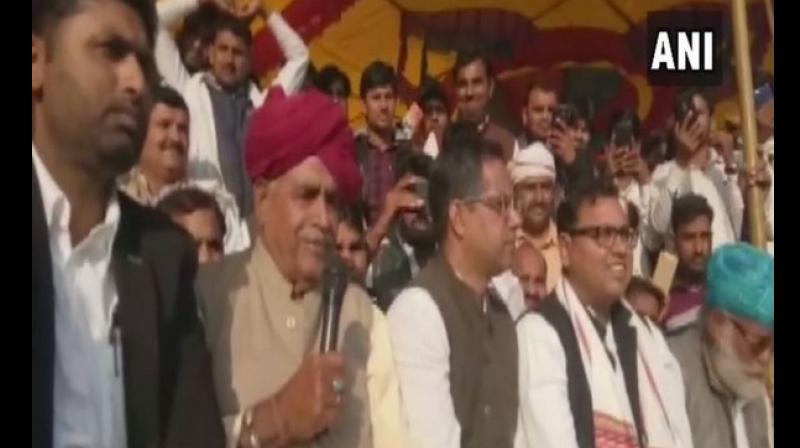 Thousands of members from the Gujjar community participated in the ‘mahapanchayat,’ which was led by Colonel (retired) Kirori Singh Bainsla. (Photo: ANI)

Sawai Madhopur (Rajasthan): A ‘mahapanchayat’ called by the Gujjar community in Sawai Madhopur on Sunday said that if they were not given 5 per cent reservation in government jobs and academic institutions in next 11 days, they would be constrained to adopt the course of agitation.

Kirori Singh Bainsla, the man behind the ‘mahapanchayat’ said, “Either the government gives us 5 per cent reservation in another 11 days or there will be agitation.”

Thousands of members from the Gujjar community participated in the ‘mahapanchayat,’ which was led by Colonel (retired) Kirori Singh Bainsla.

In December 2018, Rajasthan government approved one per cent reservation for Gujjars and four other backward castes (OBCs).

In October 2018, Rajasthan government also passed a bill, which increased OBC quota from 21 per cent to 26 per cent.

The Backward Classes (Reservation of Seats in Educational Institutions in the State and of Appointments and Posts in Services under the State) Bill provided reservation to five “most backward” OBC communities including Gujjars and four other communities—Banjara, Baldiya, Labana, Gadiya Lohar, Gadoliya, Raika, Rebari, Debasi and Gadariya, Gadri, Gayari, which were earlier grouped as the special backward classes(SBC).

The government had tabled the Bill during the State Assembly’s last year’s Monsoon Session to provide reservation in educational institutions and state jobs for the category of more backward classes within the backward classes.

The government tabled the Bill in the wake of widespread agitation by the Gujjar community, demanding reservation under the backward class category.

However, with this quota of five per cent to OBCs, the total percentage of various quotas has crossed 50 per cent. The total quota in Rajasthan now stands at 54 per cent—26 per cent for OBCs, 16 per cent for SCs, and 12 per cent for STs.