‘We will play on the front foot, be it Gujarat or Uttar Pradesh,’ said Akhilesh talking about Rahul not taking a backfoot in the elections. 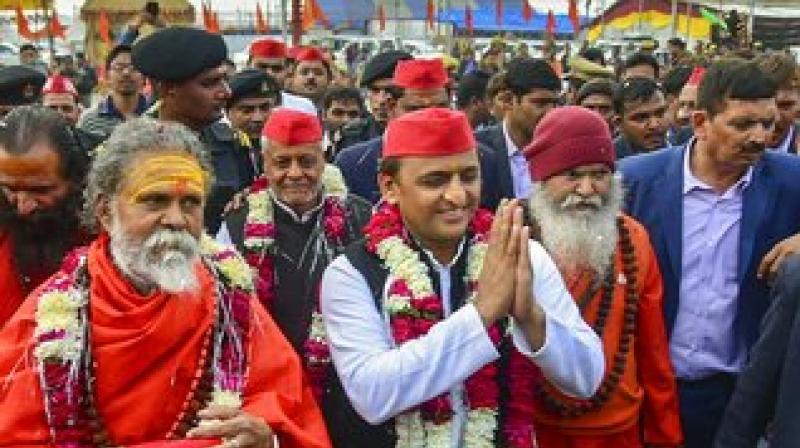 ‘If the Congress vows to fight against the BJP, which is an expert is spreading lies, it should support our (SP-BSP) alliance. We have already spared two seats Raebareli and Amethi for them,’ SP chief Akhilesh Yadav said. (Photo: PTI)

Lucknow: Samajwadi Party supremo Akhilesh Yadav on Monday said that if the Congress vows to fight against the BJP in the Lok Sabha polls, it should support the SP-BSP alliance.

When asked about the 'Priyanka factor' being termed as a masterstroke of the Congress, Akhilesh said, “If the Congress vows to fight against the BJP, which is an expert is spreading lies, it should support our (SP-BSP) alliance. We have already spared two seats Raebareli and Amethi for them.”

The former Uttar Pradesh chief minister was responding to questions during an interview to PTI in Lucknow. His remarks assume significance in the light of Congress president Rahul Gandhi's comment that he has due regard and respect for both Akhilesh and Mayawati and there was no animosity against them.

Rahul had also said his party won't play on the backfoot and added, "We will play on the front foot, be it Gujarat or Uttar Pradesh."

Asked about the appointment of Priyanka Gandhi as in-charge of Uttar Pradesh East, he said, “I welcome her entry in active politics. Youth should join active politics for making the new India."

On Yogi Adityanath government's decision to hold cabinet meeting in Kumbh in Prayagraj, Akhilesh reminded the BJP of the connection of Kumbh to Kannauj, the Lok Sabha constituency represented by his wife Dimple Yadav. “It was Raja Harsh Vardhan, whose capital was in Kannauj which started the tradition of 'daan' in Kumbh. He used to come here and give 'daan'. If the BJP government is serious about development of the state, it should tell what it has done on its own except schemes launched in my regime,” he said.

Akhilesh, who took a holy dip in Sangam – confluence of rivers Ganga, Yamuna and mythical Saraswati in Prayagraj said that in his regime Kumbh arrangements were made and that too by Muslim leaders and officers.

“People come to Kumbh due to their faith. In our regime Urban Development Minister Mohd Azam Khan, Health Minister Ahmad Hasan and Chief Secretary Javed Usmani did the best of arrangements. The SP believes in uniting people unlike the BJP which is dividing society on communal lines," he said.

Quizzed about CM Yogi Adityanath's remark that his government can resolve the Ram temple issue in 24 hours, Akhilesh said, “Pehle kisano ko agle 90 dino me 'saand' se bacha lein jo fasal chaupat kar rahe hain” (he should first save farmers in the next 90 days from the onslaught of bulls, which are ruining crops."

Adityanath had last week said that the Supreme Court must work towards an early resolution of the Ram temple case and "...if there is unnecessary delay, institutions may lose people's trust. I want to say that the court should give its verdict soon, and if it is unable to do so, it should hand over the issue to us. We will resolve the Ram Janmabhoomi dispute within 24 hours. We won't take 25 hours".

The Samajwadi Party chief said, "If such a statement is given by a chief minister on Republic Day, one can imagine what kind of the CM he must be."

Promising to make caste data available if voted to power, Akhilesh said, “If we come to power we will reveal caste data. Without knowing the caste data development schemes cannot be formed accurately".