This comes after an interview where Yogi asks SC to give verdict and claims ‘...we will resolve Ram Janmabhoomi dispute within 24 hours.’ 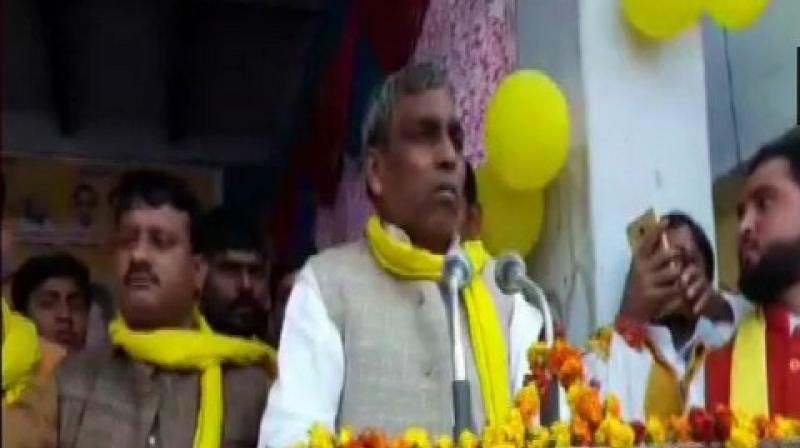 ‘BJP which is in power at the centre has not been able to find a solution to Ram temple issue in the past five years...what will the chief minister do in 24 hours,’ SBSP chief Om Prakash Rajbhar said. (Photo: ANI | File)

The BJP has its governments at the state and the Centre "who has stopped them from building the temple", he said.

"... The party is in power both at the Centre as well as state…who stopped them from building the temple? Adityanath is misleading the country on the issue," he said.

During the interview, Adityanath had reportedly asked the court to give its verdict soon "or else hand over the issue to us and we will resolve the Ram Janmabhoomi dispute within 24 hours. We won't take 25 hours."

To a question on the candidature of Congress president Rahul Gandhi for the post of prime minister, Rajbhar said he (Rahul) is suitable for the post but in a democratic set up it is the public which is supreme.

"Every body has qualities and Rahul too has them ...the manner in which the present Central government is being run, Rahul will also run it like this," he said.

On the electoral fortunes of the Congress with the entry of Priyanka Gandhi into active politics, Rajbhar said time will tell how much impact she will have on the vote percentage of the party but her coming has charged the Congress workers.

Rajbhar reiterated that February 24 will be the last day of his party's alliance with the BJP which has betrayed the backward communities. "The backward and the deprived sections will support the BSP-SP combine in the coming Lok Sabha elections," he added.

Rajbhar is minister for Backward Classes Welfare and Department of Disabled People development in the UP government.