Appreciating the government move to cut the corporate tax rate, Malpass said, it should add to more growth. 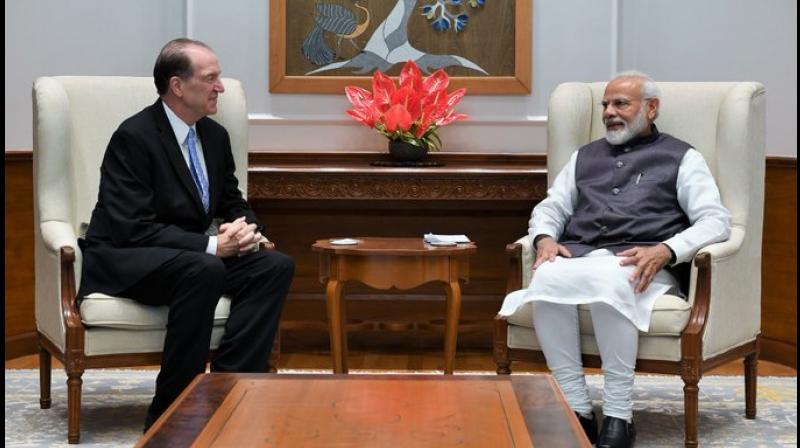 Attributing slowdown in the Indian economy to the global environment, World Bank President David Malpass on Saturday suggested that further reforms and innovation will help spur growth in the country. (Photo: Twitter/ PMO)

New Delhi: Attributing slowdown in the Indian economy to the global environment, World Bank President David Malpass on Saturday suggested that further reforms and innovation will help spur growth in the country.

He also said that innovation in the financial sector will be critical in achieving Prime Minister Narendra Modi's goal of USD 5 trillion economy by 2024-25. Although India has made progress in the financial sector, there is scope for further improvement in the banking sector, shadow banking and the capital market.

"Encourage progress in three primary areas. One is to allow the growth of the banking sector itself including the private sector. Second is deepening of corporate bond market and mortgage market and third is regulation of non-bank financial companies which have grown with the Indian financial system but entails some risks," he said.

So, having very sound regulation of those will be helpful to the growth of the financial sector which is very vital for India's growth, he said. "Prime Minister Modi has a goal of USD 5 trillion dollar economy. It will be assisted by innovation in the financial sector," he said.

On the economic slowdown, the World Bank president said India has been affected by the global environment and slowed from fast growth in earlier years. Economic growth has hit a six-year low of 5 per cent during the first quarter of the current fiscal.

"What my prescription or suggestions are that that openness to reform, innovation, improvement in government structure that allows for the faster growth. I think India has very good platform in doing that because of the experience India had with technology with knowledge as a broad concept within the society. They can help it move forward. It has made several important reforms in the last few years that can still pay off," he said.

Appreciating the government move to cut the corporate tax rate, Malpass said, it should add to more growth. The government last month slashed the corporate tax rate to 22 per cent from 30 per cent for domestic companies to push the sagging economy. He further said that the trade uncertainty is a drag on global growth along with other factors like Brexit, the frozen capital in bonds and the low investment rate in the world.

"I think what is to be done is better growth programmes country by country. India has taken a good step on the corporate tax rate. That should add to more growth," he said.

Earlier in the day, the World Bank president delivered the keynote address on the role of the financial sector in development at the NITI Aayog fifth lecture series. The lecture was attended by the Prime Minister along with ministers and senior government officials.

"Attended the 5th edition of the #NITILecture series. Heard the insightful views of Mr @DavidMalpassWBG, President of the @WorldBank on a wide range of subjects," the Prime Minister tweeted.