Want entrepreneurs to carry on business without a worry: Finance Minister Nirmala Sitharaman

'Any suggestions about credibility of RBI, for me seems a bit outlandish,' she said, talking about Rahul Gandhi's accusations. 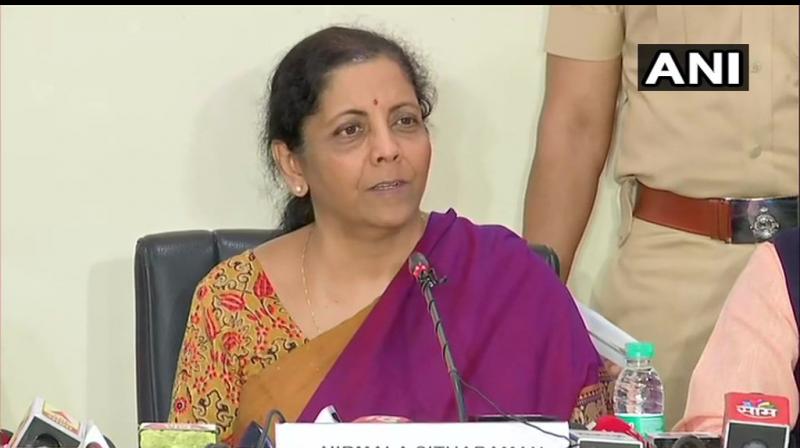 'Whatever be the size- small, medium, micro, nano or large entrepreneurs of this country, we want them to carry on with their business without a worry,' she said at the beginning of the address. (Photo: ANI)

New Delhi: Finance Minister Nirmala Sitharaman on Tuesday gave another press conference, addressing the the looming questions of the slowing economy and business in the country and most recently, RBI's recent decision to pump in Rs 1.76 lakh crore to the government.

Talking about the RBI to transfer of surplus funds amounting to Rs 1.76 lakh crore, FM said, " This committee (Bimal Jalan Committee) is appointed by RBI, had experts, they gave a formula based on which the amount was arrived at, now any suggestions about credibility of RBI, therefore, for me seems a bit outlandish."

Sitharaman on Tuesday said she has directed the tax administrators to be restraint in the tax collection process and also asked them to understand the businesses.

"Deadlines regarding tax collection, which have been given in consultation with all authorities, are all not impossible but are achievable deadlines. Therefore, my request was not to overreach, not to overstate themselves in the collection process. It is achievable if they are able to go with a bit of restraint," she told reporters in Delhi.

Coming to the issue of Rahul Gandhi's accusations on the RBI issue, she said, "Whenever Rahul Gandhi raises things like 'chor,chori,' one thing comes to my mind, he tried his best 'chor, chor, chori,' but public gave him befitting reply. What's the point of using the same words again?"

Talking about the government being business friendly, she said, "Whatever be the size- small, medium, micro, nano or large entrepreneurs of this country, we want them to carry on with their business without a worry."