I have seen advertisements in newspapers by the unions of tea estates and mill associations,' Gandhi said. 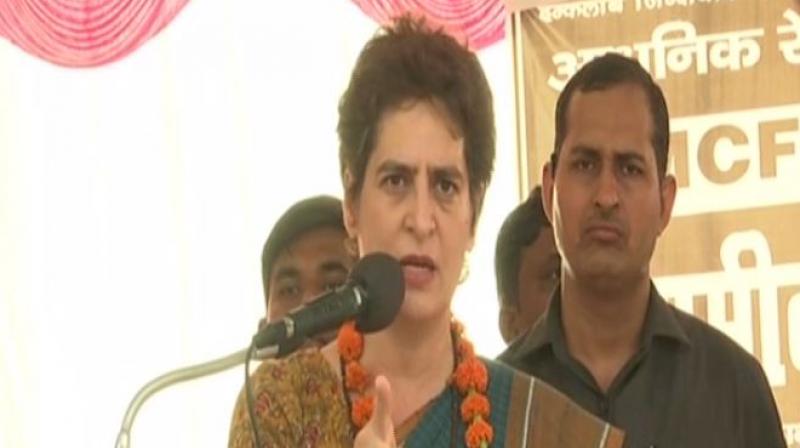 Referring to the economic slowdown, the Congress leader said the situation in the country is above politics. (Photo: ANI)

Raebareli: Congress general secretary Priyanka Gandhi on Tuesday hit out at the Centre for the privatisation of Modern Coach Factory (MCF) in Raebareli and accused the Bharatiya Janata Party (BJP) of implementing the 'Company Raj' to handover factories, public sector undertakings (PSUs) and country's money to some powerful people.

"I have seen advertisements in newspapers by the unions of tea estates and mill associations. In the advertisements, they say -- 'We are sinking, save us.' They are protesting against economic crisis and rampant unemployment in the country. Such is the situation that we have to give advertisements about our declining economy," said Priyanka while addressing the workers of MCF, who were agitating against the factory's privatisation.

"Railways, health sectors, and PSUs are the basic foundation of this country but the Bharatiya Janata Party (BJP) has brought the 'Company Raj' to handover the factories, PSUs and country's money to some powerful people. The Railways and PSUs were established to develop the country... If they all will get privatised one by one, then what will be the future of the country," asked Priyanka.

Talking about Indian railways, she said: "Indian Railways is one of the most important institutions in the country. It is one of the basic foundations of the country, which not only gave employment to many but helped in maintaining unity. This is unfortunate that the country's unity and institutions are getting weak."

Referring to the economic slowdown, the Congress leader said the situation in the country is above politics. "Still I want to ask why are they starting this (privatisation) from Raebareli and that too at the time when the factory is doing great. Because for them, politics is important than the country's citizens."

"When the government took such a decision ......did they ask you? ... If this factory would have been facing losses, we could have understood their decision... Slowly all such institutions will get privatised and will be given to the rich people," she added, while asking workers to continue to raise their voice against the injustice meted out to them.

During the protest, some people were seen donning black shirts with the slogan 'Revoke Corporatisation of MCF.'

Congress interim president Sonia Gandhi, who represents Raebareli in the Lok Sabha, had on July 1 raised the issue in the House and had said that the "privatisation" will lead to thousands of people getting unemployed.

"It will be against the objectives for which the plant was set up. The real concern is that they have chosen the MCF for the experiment," the Raebareli MP had said.

A day after she raised the issue, Railway Minister Piyush Goyal admitted in the House that the government was moving towards the corporatisation of production units including the MCF. "The move will offer jobs, bring investments and ensure growth," Goyal had said.

The workers of MCF have protesting ever since the government made the announcement.