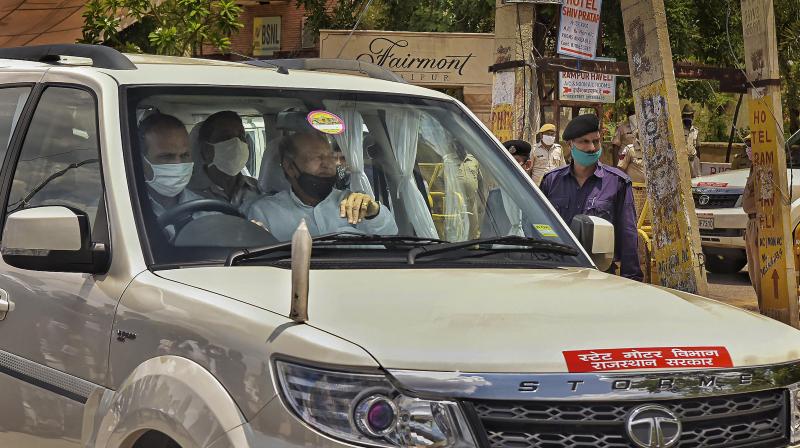 The political tug-of-war in Rajasthan continued on Monday with governor Kalraj Mishra saying that an Assembly session can be called at a short notice only if the state government says that there needs to be a trust vote, otherwise MLAs should be given three-weeks, or 21-day notice in view of the Covid-19 pandemic.

Not one to mince words, chief minister Ashok Gehlot termed the governor’s response as a “six-page love letter” and said that he has written to President Ram Nath Kovind and spoken with Prime Minister Narendra Modi about Mr Mishra's "conduct".

Last week the governor had rejected the Rajasthan government's first proposal to call an Assembly session and on Monday he returned its second proposal suggesting a three-week notice because of the coronavirus outbreak, following which Mr Gehlot said this is the first time in 70 years that such a thing has happened.

He said he has asked the President to intervene and ensure that an  Assembly session be called immediately, adding that it was the "constitutional right" of the chief minister.

"Spoke to PM yesterday over governor's conduct… The governor has once again sent us a six-page love letter. Governors are bound to approve when an elected government calls for an Assembly session,” he said.

Mr Gehlot's second proposal -- submitted on Saturday -- mentioned July 31 as the date of the Assembly. The agenda was discussions on the coronavirus outbreak and the economy.

On Monday morning, the Rajasthan Speaker dropped a petition in the Supreme Court involving his powers to disqualify rebel MLAs. The move was aimed at outmanoeuvring the governor, who had earlier cited the court case for not clearing the Assembly session request.

The Congress also mounted an all out attack on the governor for his decision. Senior Congress leader and former Union minister P. Chidambaram alleged that BJP-appointed governors have violated the letter and spirit of the Constitution and have, in the process, gravely impaired parliamentary democracy, its conventions and traditions.

"I sincerely hope that the President will take note of what is happening — the erosion of parliamentary democracy, the erosion of the Constitution, the violation of the Constitution and do what is right in the circumstances," he said adding that the President has the absolute authority to tell the governor that what he is doing is wrong and ask him to call an assembly session.

"I still believe that the President of India can intervene and instruct the governor to convene an Assembly session".

Meanwhile, Congress workers held demonstrations outside state Raj Bhavans across the country. In many states, including Tamil Nadu and Uttar Pradesh, they courted arrest.