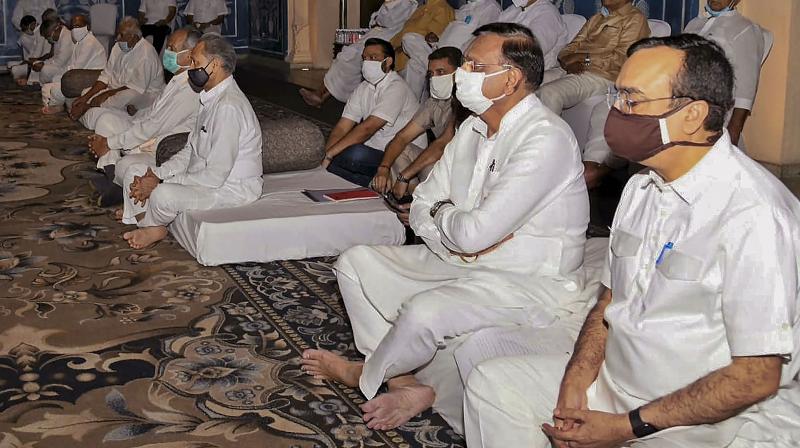 Rajasthan CM Ashok Gehlot during a prayer meeting organised under the 'Save Democracy-Save Constitution' protest against the BJP-led Central government, at a hotel in Jaipur. PTI photo

New Delhi: Amid an impasse over the convening of the Assembly session in Rajasthan, three former law ministers have written to the state governor, saying the delay in doing so has resulted in an avoidable constitutional crisis.

In a letter to Rajasthan Governor Kalraj Mishra, senior Congress leaders and former law ministers Ashwani Kumar, Kapil Sibal and Salman Khurshid said the governor's office, as envisaged under the country's constitutional scheme, is above and beyond the constraints and compulsions of partisan politics, "so that its holder can act freely and fairly to uphold the Constitution".

"Having served as Union ministers of Law and Justice in different periods of time and as students of Constitutional law, we are of the clear view that established legal position obliges the Governor to call the assembly session in accordance with the advice of the state cabinet.

"Any deviation from established constitutional position in the present circumstances would be an avoidable negation of your oath of office and will create a constitutional crisis," the former law ministers said in the letter.

According to established conventions and the relevant articles of the Constitution, principles of parliamentary democracy and authoritative pronouncements of the Supreme Court, the governor is bound to act on the aid and advice of the council of ministers in the matter of convening the state assembly, they added.

Citing a seven-judge order of the Supreme Court, the former law ministers said the governor's position, role and the limits of his circumscribed constitutional jurisdiction have been elaborated by the apex court in the "Shamsher Singh versus Union of India" case as early as 1974 and more recently, in the Nabam Rebia case of 2016.

"As a holder of high public office, you are well aware that constitutional functionaries are charged by the oath of office to vindicate the Constitution in letter and spirit. This obliges the Governor, in accordance with established traditions of constitutional and parliamentary democracy, to defer to the wisdom of an elected government that expresses the will of the people.

"We hope earnestly that true to the demands of your high office, you will not act in any manner that will countenance such a result," they said.

Mishra returned a cabinet note seeking an Assembly session to the Congress government in Rajasthan on Monday and sought additional information.

This is the second time that the governor has returned the proposal and sought clarifications from the state government.

The Congress government in Rajasthan, which is facing a political crisis following a rebellion by the now sacked deputy chief minister, Sachin Pilot, and 18 other dissident MLAs, says it wants the session to be held so that it can prove its majorit

Chief Minister Ashok Gehlot has alleged that the governor is facing pressure "from above" to stall the Assembly from meeting, hinting at the alleged involvement of the Bharatiya Janata Party (BJP) government at the Centre in the tussle for power in Rajasthan, a charge denied by the governor.