Union minister Ram Vilas Paswan-led LJP turned up heat on Modi govt, saying its support to the BJP is issue-based. 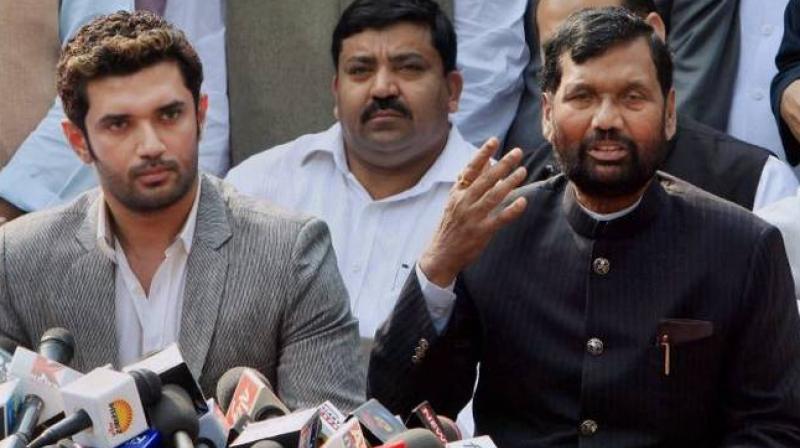 Chirag Paswan, son of Ram Vial Paswan, said patience of many within the LJP is running thin as circumstances raising concerns of the Dalits and tribals have emerged of late. (Photo: File | PTI)

New Delhi: Union minister Ram Vilas Paswan-led LJP on Friday turned up the heat on the Modi government, saying its support to the BJP is issue-based as it sought a law to restore the stringent measures of an Act on atrocities against Dalits and removal of NGT Chairman A K Goel by August 9.

Party MP and Paswan's son Chirag Paswan said patience of many within the Lok Janshakti Party (LJP) is running thin as circumstances raising concerns of the Dalits and tribals have emerged of late. Protecting interests of these communities were at the root of the LJP's tie-up with the BJP in 2014, he told a press conference in New Delhi.

His party has been demanding for over four months now an ordinance to restore the original provisions of the Scheduled Castes and Scheduled Tribes (Prevention of Atrocities) Act but the government has not done so.

He, however, stayed away from issuing any direct threat to the BJP and said the LJP has faith in Prime Minister Narendra Modi as his government had done a lot for Dalits.

"We will cross the bridge when it comes," he said when asked if his party would consider walking out of the BJP-led NDA if its demands are not met by the August 9 deadline.

Various Dalit and tribal groups have called for a 'Bharat bandh' on August 10 to press their demands, including restoration of the Act. They have said a Supreme Court order in March weakened the law.

Chirag Paswan said incidents of atrocities against the community have risen following the verdict and FIRs were not being registered by the police.

Goel was one of the two top court judges who delivered the verdict and he was appointed the National Green Tribunal chairperson earlier this month immediately after his retirement from the Supreme Court.

The LJP has criticised his appointment with Chirag Paswan writing to Modi seeking his removal, saying it has sent a wrong message. Dalits believe that he has been rewarded for his judgement, he said. His father has also written to Home Minister Rajnath Singh on the issue.

Chirag Paswan expressed the hope that the Prime Minister will take appropriate decisions once he returns from his foreign visit later on Friday.

He said the opposition has been working to give an impression that the government was being "anti-Dalit" and the Modi dispensation should take strong measures to dispel it.

Blowing hot and cold, he said the LJP strongly remains a part of the government as it makes it easier for his party to carry out its Dalit agenda. He noted that it was the Modi government which had made the Act more stringent by expanding its ambit. Chirag Paswan said if the demands are not met, then the protests during 'Bharat bandh' could be much worse than what happened on April 2, when Dalit outfits had given a similar call. More than 10 persons had died during the protest.

Chirag was joined by Ram Chandra Paswan, an LJP MP and the chief of the 'Dalit Sena', an outfit affiliated to the party.

The Dalit Sena will be forced to join the protests on August 10 if the government does not take appropriate action, he said.

The LJP, which has six MPs in the Lok Sabha, draws its core support from the Dalits in Bihar and has often switched sides between rival alliances ahead of elections. The party was in the UPA before it joined hands with the BJP in 2014.