India   Politics  27 Jul 2017  Worshipped Nitish like Shiva, but he turned out to be Bhasmasur: Lalu
India, Politics

Worshipped Nitish like Shiva, but he turned out to be Bhasmasur: Lalu

The RJD chief faces more trouble as ED registers a case of money-laundering against Lalu and his family members in the IRCTC hotel scam. 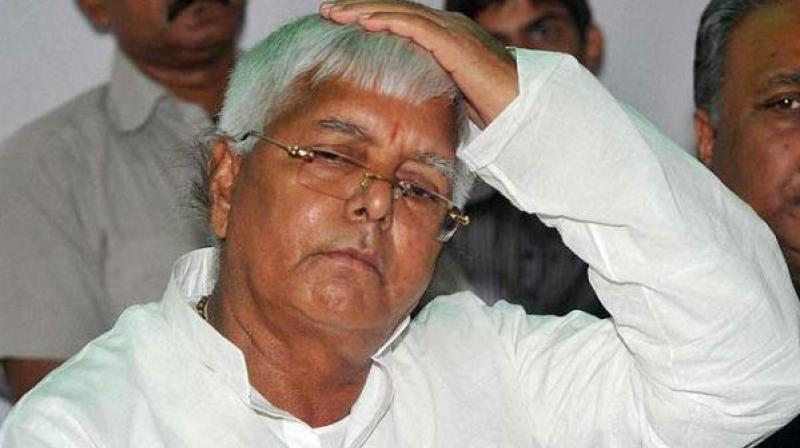 Outwitted by Nitish, Lalu is however considering knocking the Supreme Court’s doors against the Bihar Governor’s decision to allow the JD(U)-BJP combine to form government in Bihar. (Photo: PTI/File)

New Delhi: Outmanoeuvred from power by Nitish Kumar, RJD supremo Lalu Prasad Yadav plans to launch a counter assault on his former ally but looks cornered at the moment as the Enforcement Directorate has slapped a fresh case on him.

PTI reports the ED has registered a case of money-laundering against Lalu and his family members in the railway hotel allotment scandal.

On July 7, the Central Bureau of Investigation (CBI), registered a corruption case against Lalu, Rabri Devi and Tejaswi Yadav, former Indian Railway Catering and Tourism Corporation (IRCTC) Managing Director PK Goyal and the wife of Lalu's confidante Prem Chand Gupta, Sujata, on allegations of awarding the tender for development, maintenance and operation of hotels in Ranchi and Puri in 2006.

It is alleged that Lalu as Railways Minister in 2006 transferred two hotels under the IRCTC in Ranchi and Puri to Sujata Hotel Pvt Ltd, by violating tender rules. Tejaswi, who is named in the CBI FIR against Lalu and his family, has claimed he was only 14 when the deal was struck.

Outwitted by Nitish, Lalu is however considering knocking the Supreme Court’s doors against the Bihar Governor’s decision to allow the JD(U)-BJP combine to form government in Bihar.

"Nitish Kumar has betrayed us. These leaders will do anything for power. I am considering an appeal against the Governor's decision,” Lalu told the media in Ranchi. He called Nitish a huge opportunist.

"The Bihar mandate was against the BJP, to throw out Modi-Shah out of the state. I worshipped Nitish Kumar like Lord Shiva, but he turned out to be Bhasmasur. He said he would do anything but join hands with the BJP," Lalu said.

The RJD chief claimed the CBI cases against him and his family were part of a conspiracy hatched by the BJP and Nitish.

"It is sad there is no Bapu in the country today. BJP worships Mahatma Gandhi's killers and now Nitish has joined hands with them, which is very unfortunate. I had no greed in my heart, else why would I nominate him the chief minister?" he asserted.

This is the sixth time that Nitish has taken oath as the Bihar chief minister.

Nitish Kumar resigned on Wednesday as Bihar chief minister to protest his deputy and Lalu's son Tejaswi Yadav's stubbornness to stay in the Cabinet despite being named in the FIR over corruption charges.

Tejaswi blames Nitish and the Bharatiya Janata Party for the latest political development in the state.

Tejaswi said political vendetta against him has exposed the Opposition's viciousness.
"I delivered more than what was expected of me. My performance perturbed our ally and the BJP,” he tweeted.

The RJD on Thursday morning was forced to cancel its protest march to Raj Bhavan to oppose Nitish's swearing-in ceremony due to the probationary orders.

The case against Lalu, Rabri and Tejaswi:

The case has been registered under sections of the Prevention of Money Laundering Act (PMLA). The Enforcement Directorate has taken cognisance of a CBI FIR in this regard to initiate the move.

Earlier this month, the CBI had registered a criminal FIR and conducted multiple searches against the former Bihar chief minister and others.

The Enforcement Directorate will investigate the alleged "proceeds of crime" generated by the accused, purportedly through shell companies, officials said.

Lalu's wife and former Bihar chief minister Rabri Devi, son Tejaswi Yadav, and others will be probed by the agency under charges filed in the Enforcement Case Information Report (ECIR), the ED equivalent of a police FIR.

Others named in the CBI FIR include Vijay Kochhar, Vinay Kochhar (both directors of Sujata Hotels), Delight Marketing company, now known as Lara Projects, and the then IRCTC managing director P K Goel.

The CBI FIR alleges that Lalu, as railway minister, handed over the maintenance of two IRCTC hotels to a company after receiving a bribe in the form of prime land in Patna through a 'benami' company owned by Sarla Gupta.

The FIR was registered on July 5 in connection with favours allegedly extended to Sujata Hotels in awarding a contract for the upkeep of the hotels in Ranchi and Puri and receiving premium land as 'quid pro quo'.

The ED, under the PMLA, has powers to attach and confiscate tainted assets and it is expected the agency will initiate such a move once it makes progress in the case.