Modi unveiled a statue of Dr Kalam in Ramesawaram on his second death anniversary. 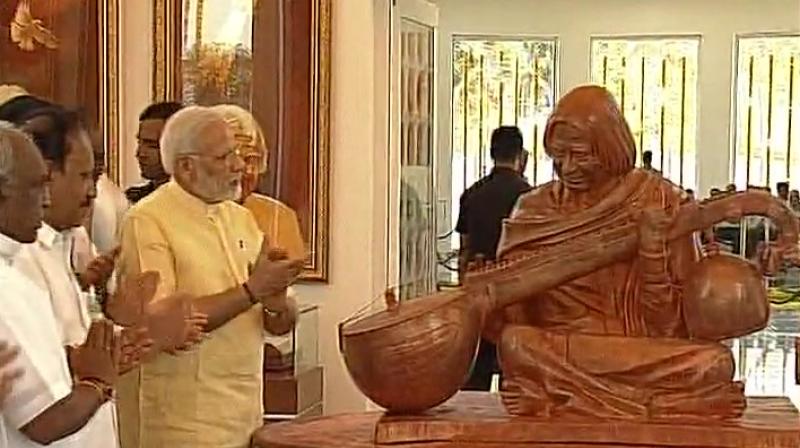 He opened the memorial built in the hometown of the former president at a location where the mortal remains of the "missile man" are buried.

Modi, who also unveiled a statue of Kalam playing a 'veena', a musical instrument, was accompanied by Tamil Nadu

The Prime Minister unfurled the national flag at the entrance of the memorial, built by the Defence Research and

Development Organisation (DRDO) with which Kalam was associated for decades as a key scientist.

Later, Modi interacted with the family members of Kalam.

He was seen holding affectionately the hands of Kalam's elder brother APJ Mohamed Muthumeeran Maraikayar while speaking to him.

With 'unity in diversity' as its theme, the memorial features quotes of Kalam and his pictures as a scientist and as the president of the country.

Resembling the arch of the India Gate, the memorial has on display replica of rockets and missiles on which Kalam had worked.

While the first phase of the memorial was inaugurated on Thursday, its second phase was scheduled to be completed in another 18 months. It would then house a library, planetarium and auditorium.

Earlier, Rao and Palanisamy received Modi at the Madurai airport from where he arrived Rameswaram by an helicopter.

A three-tier tight security ring was put in place in and around Rameswaram for the Prime Minister's visit.