Modi earlier in the day said that development will be a priority for the newly formed dispensation in Bihar. 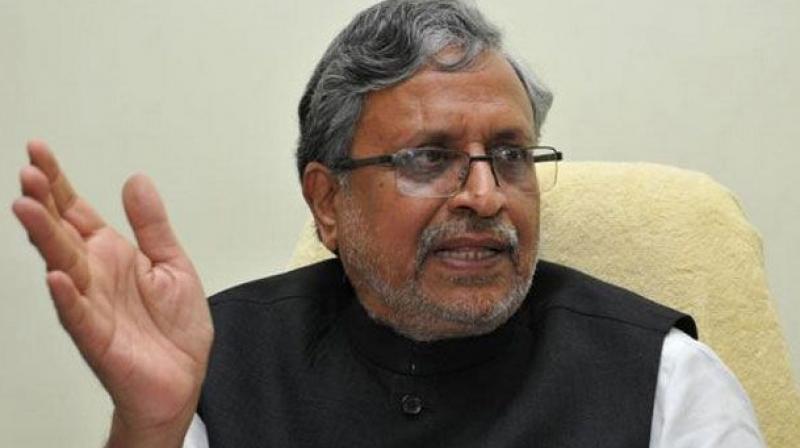 Patna (Bihar): Bihar Deputy Chief Minister Sushil Kumar Modi on Thursday said that the Congress and the Rashtriya Janata Dal (RJD) are responsible for the collapse of the grand alliance, which ruled previous state government.

"Now, Bihar will witness good time. The grand alliance collapsed because of Congress and the RJD," Sushil Modi said.

Modi earlier in the day said that development will be a priority for the newly formed dispensation in Bihar.

"Development will be a priority. We will take Bihar to greater heights," said Modi.

Bihar witnessed heated political environment soon after Nitish Kumar resigned on Wednesday as Bihar Chief Minister to protest against his Deputy and RJD Supremo Lalu Yadav's son Tejaswi Yadav's stubbornness to stay in the Cabinet despite being named in F.I.R. over the corruption charges.

However, Tejaswi has put onus on Nitish and BJP for the latest political development in the state. Tejaswi said that political vendetta against him exposed the Opposition's viciousness.

"I delivered manifolds than what was expected of me. My performance perturbed our ally & BJP. Vendetta against me exposes their viciousness," he tweeted.

Congress on Thursday also alleged that the BJP and JD-U hatched a pre-planned conspiracy to topple 'mahagadhbandhan' led Bihar Government.

Senior Congress leader Shakeel Ahmad said that the RJD should have been invited to form government in Bihar for being the single largest party in the state.

" Nitish Kumar's party did not have more numbers than the RJD so the Governor should have asked others to prove their majority, but it was pre-scripted. From Delhi to Bihar, it is a planned conspiracy," Shakeel Ahmad said.

He further said that Congress had supported Nitish as he was against Prime Minister Narendra Modi-led BJP Government.

"We did not expect this from Nitish ji. Once he was against Modi ji and that time Congress supported him but he betrayed us," said Shakeel.

Congress leader Mallikarjun Kharge also alleged that BJP is using every tactic to break the Opposition.

"Those who demanded votes in the name of secularism today have joined the ones who believed in dictorial politics," said Kharge.