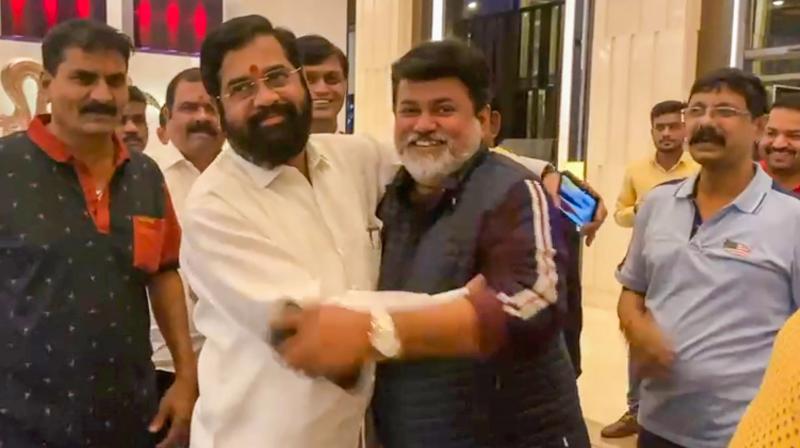 Mumbai: With the Centre providing Y-plus security to Maharashtra's rebel Shiv Sena MLAs, the party on Monday claimed it was now evident that the BJP was "pulling the strings" amid the current political turmoil in the state.

An editorial in the Sena mouthpiece 'Saamana' likened the rebel Sena MLAs led by Eknath Shinde to "big bulls", and alleged that they have been "sold" for Rs 50 crore.

Those who were provided the security cover include Ramesh Bornare, Mangesh Kudalkar, Sanjay Shirsat, Latabai Sonawane, Prakas Surve and 10 others.

Their families living in Maharashtra will also be secured, the officials had said.

About four to five Central Reserve Police Force (CRPF) commandos, in shifts, will be securing each MLA once they are in Maharashtra, they added.

The editorial in 'Saamana' said, "Finally, the BJP has been unmasked. They were saying the rebellion in the Shiv Sena was an internal matter."

"But, in the darkness of the night, uber rich Ekdas (Eknath) Shinde and Devendra Fadnavis (the Leader of the Opposition) met in Vadodara. Even Union Home Minister Amit Shah was present for the meeting," it claimed.

The Centre immediately accorded Y-plus security to the rebel MLAs after the meeting, as if they are the "protectors of democracy", the Marathi publication said.

Does the Centre fear that the MLAs will return to their party fold after coming back to the state? it asked.

"It is now evident that the BJP at the Centre and in the state have written the script for these actors (rebel MLAs) and are pulling the strings and directing the entire play," the editorial said.

The BJP's "treason" against Maharashtra has been exposed by providing Y-plus security to the rebel MLAs, it claimed.

The Sena further said providing Y-plus security to the rebel MLAs by citing a threat to their life, is like encroaching upon the rights of the state, and this is not the first example of the Centre's "autocratic" behaviour.

The Sena said Walse Patil has clarified that the security cover of the families of rebel MLAs has not been removed.

"Even if it was removed, it could not have been said this was done due to exact political revenge. But, the state government did not resort to such cruel behaviour," it said.

A majority of Shiv Sena MLAs have shifted their loyalty to Eknath Shinde and are currently camping in Assam's Guwahati city, plunging the Maha Vikas Aghadi (MVA) government led by CM Uddhav Thackeray, who heads the Shiv Sena, into a crisis.

The Maharashtra legislature secretariat on Saturday issued 'summons' to 16 of the rebel Shiv Sena MLAs, including Shinde, seeking written replies by June 27 evening to complaints seeking their disqualification.