The Trinamool Congress supremo said all the 23 opposition parties should unitedly fight against malfunctioning of EVMs. 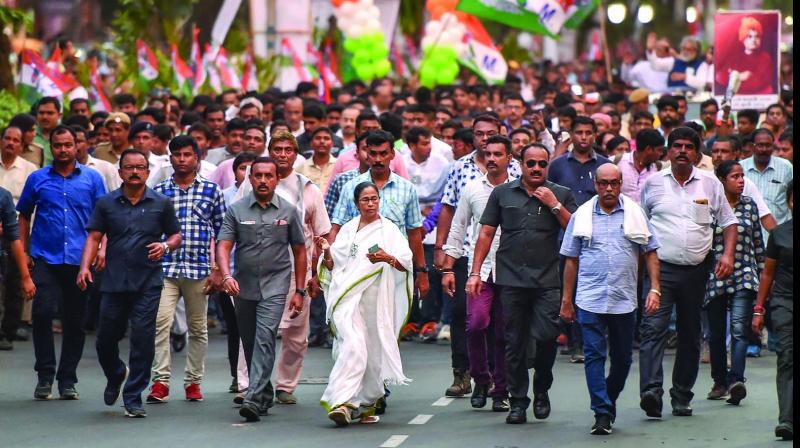 Speaking during the debate on the governor's address in the state assembly, she said the BJP is trying to run a parallel government in the state and parties like the Congress and the CPI(M) should join hands with the TMC to fight against it. (Photo: File)

Kolkata: In an appeal to save West Bengal, the state Chief Minister Mamata Banerjee reached out to opposition Congress and CPI(M) to join her fight against the BJP in the state.

Speaking during the debate on the governor's address in the state assembly, she said the BJP is trying to run a parallel government in the state and parties like the Congress and the CPI(M) should join hands with the TMC to fight against it.

"The people of the state are witnessing in Bhatpara what happens if you vote for the BJP. I feel all of us (TMC, Congress and CPI-M) should come together in the fight against the BJP. It doesn't mean we have to join hands politically. But on common issues at the state and the national levels, we can come together," she said.

The Trinamool Congress supremo said all the 23 opposition parties should unitedly fight against malfunctioning of EVMs.

"Before elections we (opposition parties) had tried to raise our voice against the use of EVMs. We had even approached the Supreme Court, but it didn't yield any result. We can take up the matter again and move court," she said.

Reminding the Congress about the importance of TMC's support in the floor of Parliament, Banerjee urged Leader of Opposition and senior Congress leader Abdul Mannan to stop abusing her party in Bengal and concentrate on fighting the BJP in the state.

However, the two parties rejected her appeal saying her policies are responsible for the saffron party's growth.

“People say something and then go back on their words, it’s her nature. If she is serious she’ll have to talk to our senior leaders. The way BJP is growing in Bengal, it is due to Mamata ji’s failures,” Adhir Ranjan Chowdhury said, reported ANI.

State BJP president Dilip Ghosh said Bannerjee's appeal to the Congress and the CPI(M) is a reflection of the "fear psychosis" that has gripped the TMC.

"It only shows that the TMC and Mamata Banerjee are afraid about the growth of the BJP in Bengal. She has very well understood that she is going to lose the next assembly elections in the state.

"The CPI(M), Congress and TMC have been together at the national level so we are not at all afraid if they join hands in the state. Rather, it will act as an advantage for BJP in Bengal," Ghosh said.

Assembly elections in West Bengal are due in 2021.

The BJP had recently won 18 of the 42 Lok Sabha seats in the state and bagged 40.5 per cent vote share - a record jump of 23 per cent from the last general elections when it had won only two seats.

Although the TMC managed to increase its vote share by four per cent, its seat share came down to 22 from 34 in last general elections.

The CPI(M)-led Left Front drew a blank, whereas the Congress tally was down to two from four it had in the 2014 Lok Sabha polls.