Modi's convoy arrived at his mother's residence here as scores of supporters lined up on the streets to catch a glimpse of their leader. 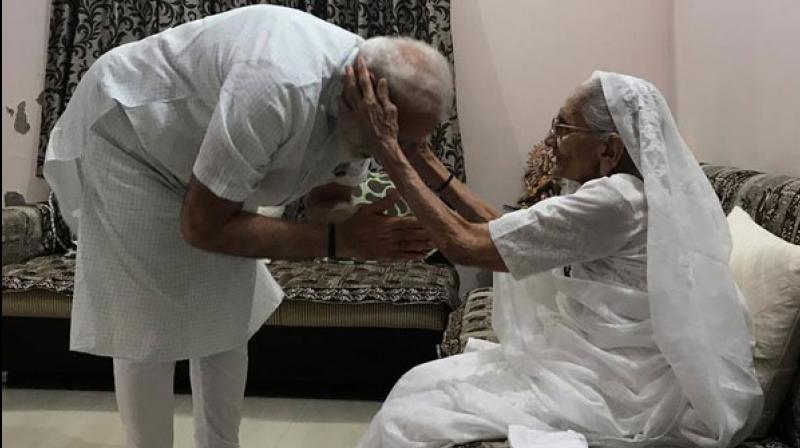 Gandhinagar: Four days before taking oath as Prime Minister for a second term, Narendra Modi on Sunday visited his mother Heeraben Modi to seek her blessings.

Modi's convoy arrived at his mother's residence here as scores of supporters lined up on the streets to catch a glimpse of their leader. He was greeted with thunderous applause and cheering. Supporters were seen raising slogans in praise of the Prime Minister while holding placards with his pictures.

Security was beefed up during the Prime Minister's visit here.

Earlier on Saturday, Modi visited Ahmedabad where he paid tributes at the statue of Sardar Vallabhbhai Patel near the airport. He later addressed a gathering of BJP workers along with party chief Amit Shah and Chief Minister Vijay Rupani.

On Monday, Modi is scheduled to visit his parliamentary constituency Varanasi to hold a five-kilometre-long roadshow till Kashi Vishwanath temple amidst heightened security.

The Prime Minister won the Varanasi Lok Sabha seat by a huge margin of 4, 79,505 votes.