Chief Minister Siddaramaiah said the party will continue in its efforts to build a 'Nava Karnataka'. 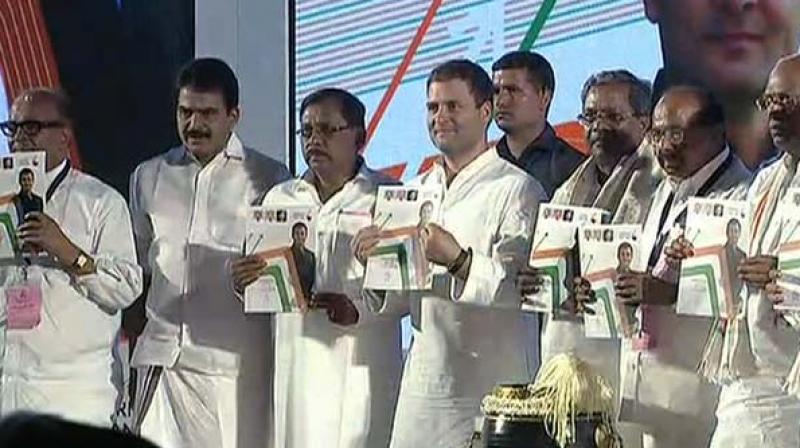 Mangaluru: The campaigning for the May 12 Karnataka elections has gained momemtum with Congress President Rahul Gandhi returning back to the state for the seventh leg of his poll campaign.

Hailing the manifesto as "Mann Ki Baat" of the Karnataka people, Gandhi said that unlike the BJP, the Congress Party's manifesto was not made by three or four people in a closed room.

He said the manifesto carries the voice of the people of Karnataka. This is made by going to every single district and every single community, he said.

Continuing his tirade against the BJP, Rahul said, "This is unlike the manifesto of the BJP which will have the hidden interests of the RSS and Reddy brothers".

"BJP manifesto is decided by 3-4 leaders. It will be the manifesto of the RSS. I am here to listen to the people of Karnataka. That is the difference between Congress and our Karnataka," he said.

"Our opponents do not respect the culture of Karnataka. PM Narendra Modi of the BJP does not stand up to what he says," Gandhi added.

The Congress president said that Siddaramaiah-led Karnataka Government has delivered as promised.

On behalf of the party, Gandhi again give a commitment of fulfilling the promises made in this manifesto as well.

Speaking to the party workers, Chief Minister Siddaramaiah said there was no anti-incumbency against his government as the party has delivered as promised by them.

"Karnataka is a progressive state and this manifesto is a big step in taking the state to the next level. We will win the election and ensure that our Government will fulfill the promises made in the manifesto," he added.

He also said that during the preparation of every budget, he would check the party's 2013 Manifesto, and fulfill the promises they had made.

The chief minister said that the party will continue in its efforts to build a 'Nava Karnataka'.

"Modi's aim is to give Karnataka's wealth into the hands of Reddy brothers, to give it to 5-10 rich people. Congress will never allow it to happen. Listen it is impossible," he said.

He also accused Modi of telling "lies one after the other" and spreading anger, hate and added, "this man cannot take this country forward."