'No bigger example of free speech than calling your own PM donkey,' Venkaiah Naidu said. 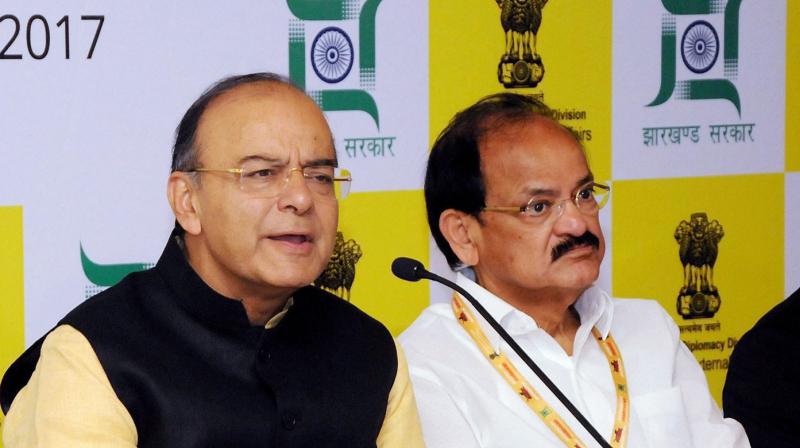 New Delhi: The Centre on Monday came down heavily on the Congress for accusing the Bharatiya Janata Party (BJP)-led NDA of suppressing the right to dissent in the nation in regard to the recent violent clashes in Ramjas College. The Centre asserted that the very party which had imposed Emergency in the nation once, was giving sermons on freedom of expression.

Addressing the media here, Union Information and broadcasting minister M Venkaiah Naidu asserted that there can be no bigger example of freedom in the country than calling your own Prime Minister a 'donkey'.

"You live in a country where you compare your Prime Minister to a donkey. How is there no freedom of expression? Freedom of expression means you also respect others opinions. Congress which has no respect for fundamental rights is now trying to poison minds of people. They are in alliance with extremist forces and leftists and are inciting violence," Naidu said.

Accusing the Congress of giving a political tinge to a situation which was strictly about the internal matters of students, the Union Minister added that members of the grand old party have a history of visiting campuses and inciting violence.

"I'm surprised about the efforts made by Cong and Left to give a different colour to the issues that are happening in few universities saying this is assault on freedom of expression. Certain misguided sections are trying to mislead the young population n create social tensions n hurt sentiments of people of India," he said.

Asserting that there was no question of denying freedom of expression as it's guaranteed by the Constitution, Naidu, however, noted that there are certain restrictions which prevent one from hurting religious sentiment, questioning national integrity and against advocating separatism.

"Dissent and difference of opinion is agreeable but not disintegration. Congress is facing rejection from nation because of its separatist policies and their approach of supporting such forces. There is a systematic effort in place to malign the country because our opponents are unable to digest their defeat in the nation and the surging popularity of our Prime Minister," he said.

Talking about the protest by certain section of students demanding Kashmir's 'azadi' and raising pro-Afzal Guru slogans, the Union Minister asserted that Kashmir was an integral part of India and calling for its 'freedom' simply echoed pro-Pakistan sentiments.

"What is the meaning of azadi of Kashmir? Thousands have laid down their lives for the unity of the nation. Kashmir is an integral part of India, how can someone advocate azadi for Kashmir? How can one demand an anniversary for Afzal Guru who was responsible for attacking the parliament which is the temple of democracy? You cannot advocate separatism," Naidu said.

Emphasising that dissent is agreeable but not disintegration, he stated that the clashes in the universities were an integral matter of the students and not an issue which needed political intervention.

"Against the tyranny of fear we stand with our students. For every voice raised in anger, intolerance and ignorance there will be a Gurmehar Kaur," tweeted Gandhi.

Bharatiya Janata Party (BJP) MP Pratap Simha had earlier compared Kaur with fugitive underworld don Dawood Ibrahim, while Union Minister Kiren Rijiju tweeted to suggest that Kaur was being influenced by someone or a group.

A clash had broken out between the All India Students Association (AISA) and Akhil Bharatiya Vidhyarthi Parishad (ABVP) on February 21 after the members of the latter staged a protest outside Ramjas College against an event that had Jawaharlal Nehru University (JNU) student Umar Khalid as a speaker.