Suleman's family, however, denies this and says he had nothing to do with the protests. 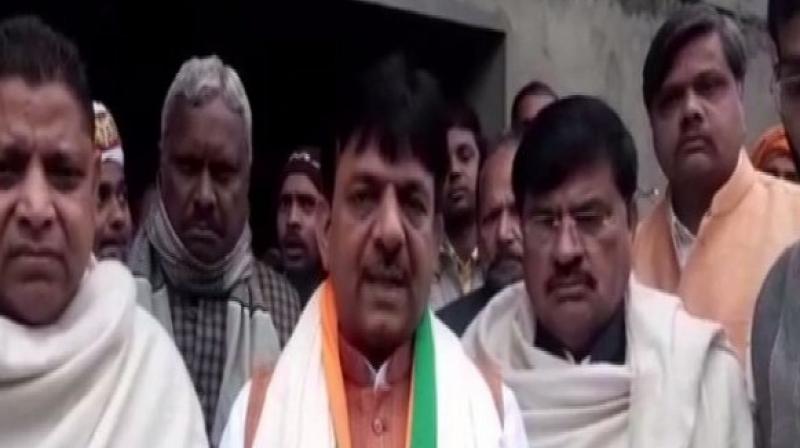 An Uttar Pradesh minister on a visit here on Thursday refused to meet the families of the two Muslim men who died in the recent protests against the new citizenship law, terming them "upadravi" (vandals). (Photo: ANI)

Bijnor: Uttar Pradesh Minister Kapil Dev Agarwal stoked a controversy on Thursday after he refused to meet the families of two victims, who had lost their lives in the protest against Citizenship Amendment Act (CAA) and NRC last Friday in Bijnor.

The Minister, however, defended his action by saying that he had met a journalist from the Muslim community, who was injured during the clashes.

He stated that Om Raj Saini, whose house he had visited today, was injured by a bullet from the rioters while he was returning from his fields.

"I have held talks with the police and they told me Om Raj Saini was injured by a bullet while he returning from his fields. Therefore, upon the directions of Chief Minister, I visited his house and assured his family that his medical expenses will be borne by the administration," Agarwal said.

He further said that while everyone had a right to protest peacefully, violence and vandalism could not be justified.

"Firstly, the responsibility lies on those who protested using violent means against CAA. Everybody has the right to protest but indulging in vandalism, arson is never justified," Agarwal said.

He asserted that the state administration will deal strictly with those who are found guilty.

"The two (Muslim) men who had lost their lives were involved in rioting. They died due to bullet injuries during the protest," he said.

Violent protests had broken out last Friday in several parts of Uttar Pradesh against the CAA, in which more than 20 people had lost their lives.