In a late night coup on Wednesday, Mr Sangma along with 11 other Congress MLAs, including ex-Assembly speaker Charles Pyngrope, joined TMC 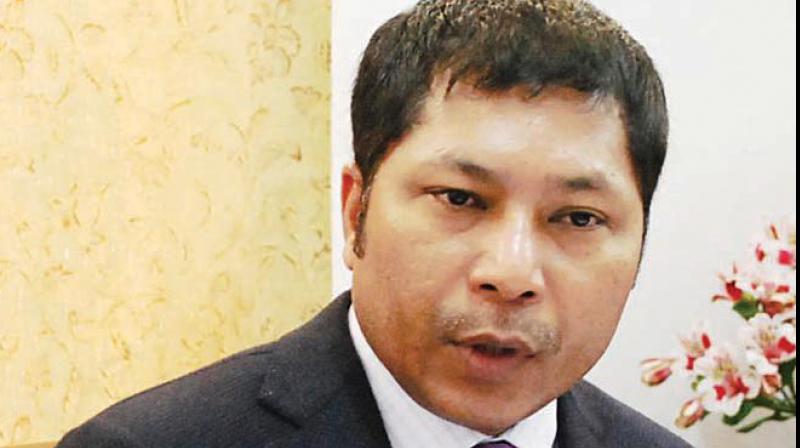 Guwahati: A day after joining the Trinamul Congress with 11 legislators in Delhi, former Meghalaya chief minister Mukul Sangma said on Thursday that he took a conscious decision to quit the Congress because it failed to make its presence felt as the main Opposition party of the country.

Talking to reporters in Shillong, Mr Sangma said, “Today is a very momentous occasion for Meghalaya. With utmost sense of humility but complete sense of responsibility and commitment towards fulfilling our responsibility, we have taken a decision to merge with the Trinamul Congress.”

He asserted, “A complete sense of commitment towards serving the people of the frontier state has brought us to take this decision. In the 2018 Assembly elections, we were confident of forming the government but we could not. Again, post-poll there were activities to poach our members.”

In a late night coup on Wednesday, Mr Sangma along with 11 other Congress MLAs, including ex-Assembly speaker Charles Pyngrope, joined the Trinamool Congress in Meghalaya, dealing a major blow to the Congress party. Of the 12 MLAs, eight are from Garo Hills while four are from Khasi Jaintia Hills.

The Congress in Meghalaya on Thursday described 12 of its 17 MLAs, including the Leader of the Opposition in the Assembly, joining the Trinamool Congress as a "big jolt", but asserted that the party will stage a comeback in 2023 when the next Assembly election is due in the state.

Mr Vincent H Pala said, "There is nothing wrong with the party but something is certainly wrong with those who deserted it and joined the TMC."

Denying reports that Mr Sangma was unhappy at his taking over as the state party chief, Mr Pala said it is not a sudden move by the former CM.

"Mukul had clearly stated that it (desertion) didn't happen suddenly. It started two years back. We knew this will happen. We are prepared for this," he told reporters.

The speculation on Mr Sangma joining Trinamool Congress was rife since last month when he met TMC general secretary Abhishek Banerjee in Kolkata.

With the latest political development, the Trinamool Congress has become the main Opposition party in the Meghalaya House despite not winning any seat in 2018 elections to the 60-member Assembly.

It is significant that all the defecting MLAs of Meghalaya also submitted a letter to Assembly Speaker Metbah Lyngdoh around 10 pm on Wednesday, informing him of their change of status. Those who signed the letter of merger include Mr Sangma’s wife Dikkanchi D. Shira, his daughter Miani D. Shira and his younger brother and former minister Zenith Sangma.

All eyes are now on Meghalaya Assembly Speaker as he is expected to take a call on the defection of 12 Congress MLAs to the Trinamool Congress unit in the state and also the appointment of former chief minister Mukul Sangma as the Leader of Opposition.

“I have received a letter of merger signed by 12 Congress legislators late Wednesday night. I have not accepted it so far. I am yet to examine it and I will follow the procedures as enshrined in the provisions of the Tenth Schedule,” the Speaker told reporters.