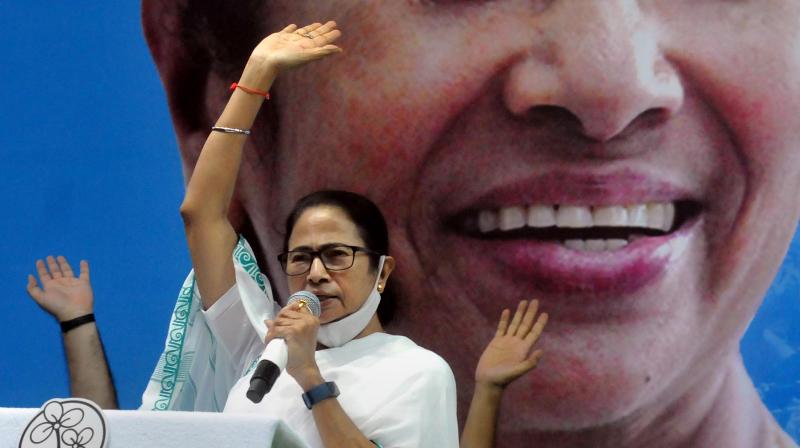 Kolkata: To foil the plan of the BJP at the Centre on a separate statehood of Gorkhaland, West Bengal chief minister Mamata Banerjee on Tuesday proposed to make a "permanent solution" for Darjeeling  to keep the hills, Dooars and Terai region in North Bengal intact with the state.

Her offer came amid a tripartite talk initiated by union home minister Amit Shah in New Delhi on October 12 with the state government and various political parties including elected representatives of the BJP to sort out the issues of the Gorkhas.

The Trinamul Congress supremo, who is touring North Bengal, also expressed her anguish during her government's administrative review meeting of two districts, Darjeeling and Kalimpong, at Kurseong on the victory of the BJP at Darjeeling seat in the last three Lok Sabha Election with the promise of a separate statehood for the hills which, according to her, is unheard of in Himachal Pradesh.

Without taking the name of BJP, Ms Banerjee said, "Some political parties surface before the election with a promise to turn Darjeeling into a state but disappear later. Every time an MP belonging to them is getting elected here. Except one MLA, rest is ours. Their actual motto is to keep you divided. Now I ask you to give me a plan on how to reach a permanent solution. I will help you to keep Darjeeling with Bengal. Give me a chance. I will make a permanent solution for you."

She added, "I am ready to offer assistance so that your children can establish themselves. There are a lot of scopes. But a movement every ten years vandalises everything in the hills, forcing people not to visit here in fear. Such things do not happen in Himachal Pradesh. A government alone can not usher development in the hills. In Uttarakhand, BJP and many other parties exist. Still scores of people die there in natural disasters."

Ms Banerjee suggested a committee be set up to formulate the "plan" for a "permanent solution" for the hills. Anit Thapa, who recently launched a separate political outfit, Bharatiya Gorkha Prajatantrik Morcha, after leaving Gorkha Janmukti Morcha and who was also present at the government meeting, will be a member of the panel along with two other hill leaders, Roshan Giri and Amar Singh Rai and TMC leader Goutam Deb.

The CM also called for an eco-friendly infrastructure in the hills in wake of multiple landslides due to a heavy rainfall recently.