Sharad Pawar backs Sena's 50:50 demand, says 'nothing wrong in that'

Thackeray on Thursday demanded the BJP honour the 50:50 agreement made during his meeting with Shah earlier this year. 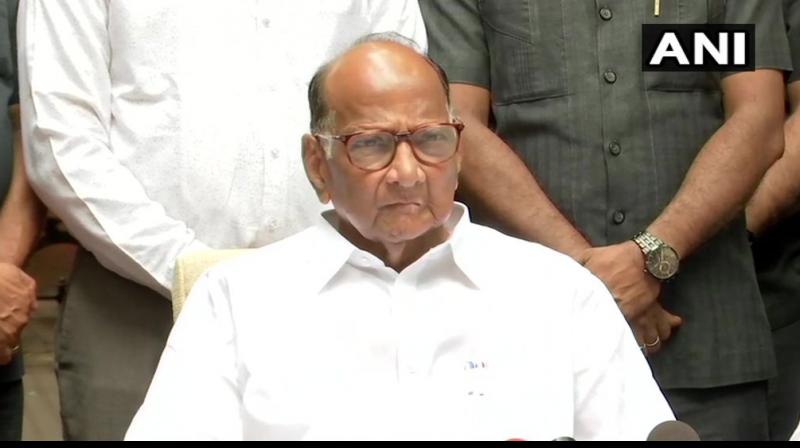 Nationalist Congress Party chief Sharad Pawar on Friday said there is nothing wrong with Shiv Sena’s demand of 50:50 formula in the alliance in Maharashtra as Uddhav Thackeray's party has the experience of running the state government. (Photo: File)

Mumbai: Nationalist Congress Party chief Sharad Pawar on Friday said there is nothing wrong with Shiv Sena’s demand of 50:50 formula in the alliance in Maharashtra as Uddhav Thackeray's party has the experience of running the state government.

Pawar is being credited for stopping the BJP-Shiv Sena juggernaut from achieving its goal of 220 seats in Maharashtra. The BJP's tally has come down from 122 in the 2014 polls to 105 seats, prompting Thackeray to remind party Chief Amit Shah of his "50:50" promise.

"In the 1990s also, there was a 50-50 formula for the Shiv Sena and the BJP. So they have past experience (in running the government). So the Sena can insist, nothing wrong in that," Pawar said in an interview with NDTV.

Shiv Sena's Manohar Joshi was the Maharashtra Chief Minister from 1995-1999.

The Congress-NCP alliance has won 102 seats in Maharashtra despite Congress chief Sonia Gandhi not addressing a rally in the state.

"Congress's local leaders worked with the NCP. There was perfect coordination. Yes Mrs Gandhi didn't come because of her health but Rahul Gandhi came. I am a local here so I had to take the initiative," defending his ally, Pawar was quoted by NDTV.

Talking about the odds his party was facing going into the state elections, he said, "Yes, we were facing a lot of problems - means of resources, funding communication. The other side was pouring money like anything."

On Maharashtra Chief Minister Devendra Fadnavis's controversial jibe over the exodus of leaders from the NCP, Pawar said he is not fully mature. Amit Shah and Prime Minister Narendra Modi's attacks were not good, he said.

"I don't think the CM is fully mature and he understands... So I don't mind when he commented against me. But comments made by the PM (Prime Minister Narendra Modi) and the Home Minister (Amit Shah) were not good," he said.

"I was given Padma Vibhushan, the second highest honour (in India). If there are so many problems in me, why give me the award?" he added.

Pawar, who had offered support to the BJP in 2014 before its tiff with the Sena was resolved, said there was no question of going with the Shiv Sena. "They will not approach us as they have an understanding with the BJP," he said.

Thackeray on Thursday demanded the BJP honour the 50:50 agreement made during his meeting with Shah earlier this year. "Sena contested less seats on BJP's request; we can't be so accommodating always," he had said.