'Nothing but political vendetta', says Karti after meeting P Chidambaram at Tihar

A Delhi court on Thursday extended Chidambaram's judicial custody till October 3 in a corruption case filed by the CBI. 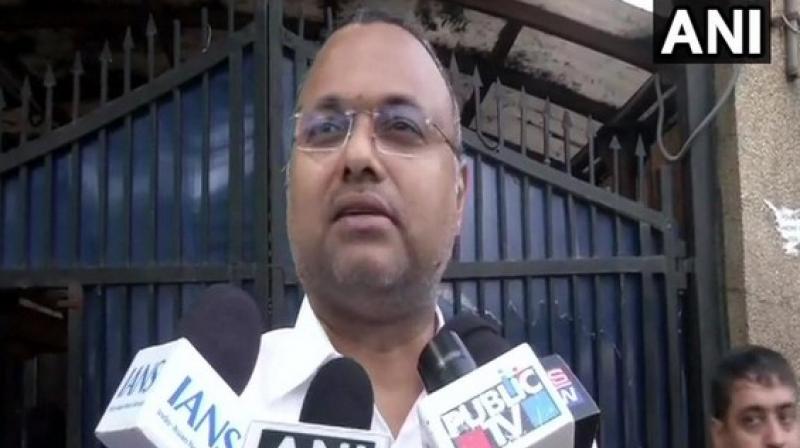 Adding further, Karti stated that such events were creating a very toxic and negative atmosphere for the polity of the country. (Photo: ANI)

New Delhi: Karti Chidambaram, son of former finance minister P Chidambaram met with his father in Tihar jail on Thursday and reiterated his accusation of political vendetta being the reason behind his father's imprisonment.

Following his meeting with his father, Karti lashed out on the Central government while addressing the media outside the jail premises.

Blaming the NDA government, for targeting the opposition leaders, Karti said, "We have repeatedly said it's nothing but vendetta politic. My father and Shivakumar are not undergoing any trial, they have not been found guilty by any court. Only under the pretext of investigation, they are being held in judicial custody."

Adding further, he stated that such events were creating a very toxic and negative atmosphere for the polity of the country.

He alleged that the government is marking off strong congress leaders with selectively bogus cases.

A Delhi court on Thursday extended Chidambaram's judicial custody till October 3 in a corruption case filed by the CBI.

Chidambaram was arrested by the CBI on August 21. At present, he is in judicial custody in Tihar Jail.

He is facing a probe by the CBI and the Enforcement Directorate (ED) for alleged irregularities in granting the clearance to INX Media to the tune of Rs 305 crore in 2007.