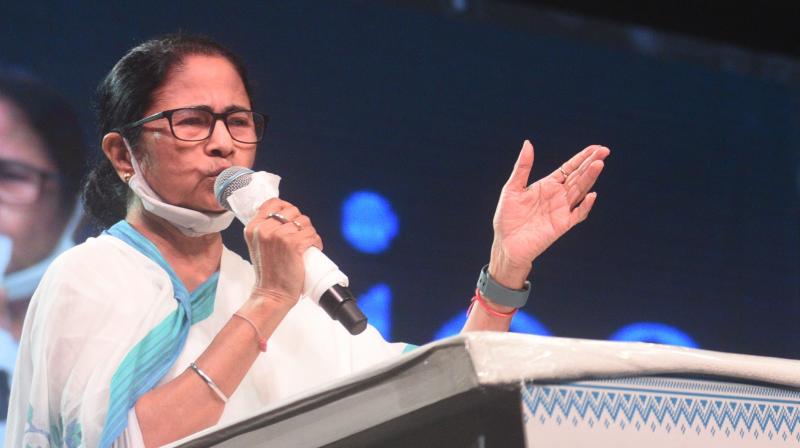 Kolkata: Breaking her silence on the arrest of her Cabinet and party colleague Partha Chatterjee by the Enforcement Directorate in the School Service Commission (SSC) jobs scam, West Bengal Chief Minister Mamata Banerjee on Monday asserted her zero-tolerance against "corruption" and favoured punishment of "life imprisonment" for those guilty of the crime.

In a setback to the minister, the doctors at AIIMS Bhubaneswar ruled that he did not need immediate hospitalisation.

"I do not support injustice. It is also not my hobby and profession to support corruption. Someone can make a mistake. If I make a mistake knowingly then it is a crime. If done unknowingly, there is a scope of correction. But I have never allowed myself in doing anything wrong knowingly. TMC does not spare if anyone is a thief or a dacoit. I have ensured arrests of many of our boys — be it MLAs, MPs and ministers — earlier," the CM told the Banga Bhushan and Banga Bibhushan award ceremony at Nazrul Mancha in the city.

Suspecting foul play behind the controversy, Banerjee pointed out, "Whether it was a trap needs to be looked into also. Sometimes some people lay a trap. We had a big rally on July 21. The very next day they arrived at 5 am. The BJP could not accept the perception of our success."

Banerjee further claimed that she did not know another arrested accused, Arpita Mukherjee, with whom she was found sharing a dais in presence of Mr Chatterjee at a Durga Puja event of Naktala Udayan Sangha.

She said, "I want the completion of the probe and truth and justice to be delivered within a time frame, say three months. If someone is proved guilty in reality and is sentenced to life imprisonment, I do not mind. But the CPI(M) and BJP have such audacity that they circulated my photos with the mountain of cash across the city. Had I not been in politics, I would have chopped off the tongue."

Banerjee added, "Today I am really sad, pained and shocked by the behaviour of some political parties. The day I heard some youth were deprived and the CPI(M) and BJP were sitting on the road with them, I went and met them. I asked my colleague, who was then the education minister, to solve these cases. They talked about some laws. Still, I extended the list (of job appointments) apart from those who were deprived. I created the posts also. In what kinds of jobs, don't you allot one for your own people out of 100?"

Earlier Chatterjee was taken by road to Kolkata airport from SSKM Hospital through a green corridor in the morning following the Calcutta High Court's order. He was then flown in an air ambulance to Bhubaneswar for medical examination. A group of people from West Bengal greeted him by shouting "Chor, Chor" when the TMC secretary general, with head covered in a white towel, was taken in a wheelchair to AIIMS there.

Mr Chatterjee later received a setback as the specialist doctors ruled out his admission to the hospital. AIIMS executive director Ashutosh Biswas said, “We have conducted a thorough screening of him. He has some chronic diseases but does not need immediate hospitalisation. The court has been informed about it. The next course of action will be taken as per the court directives.”

At the Bankshall Court, Mr Chatterjee was produced virtually while Arpita physically before the PMLA judge in the afternoon. The ED prayed for a remand of two weeks for Mr Chatterjee while 13 days for Arpita.