Congress also asked the govt to do away with steep rise in duties on Pakistani products which has led to joblessness. 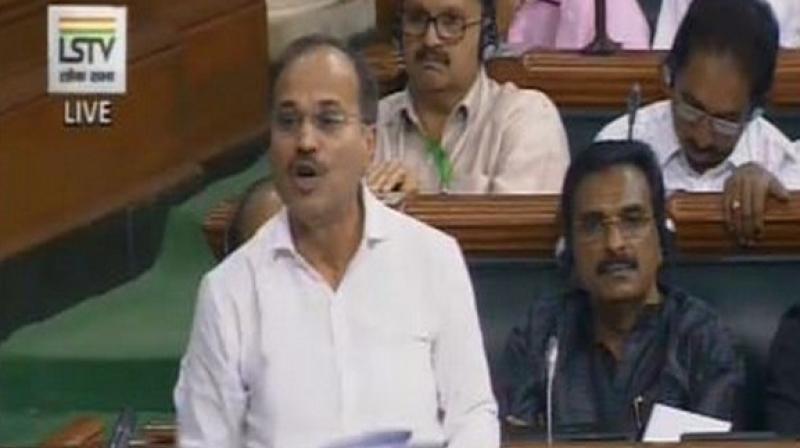 He alleged that govt suffers from 'megalomania', claiming it used its advertisement measures to pressure the media. (Photo: ANI)

New Delhi: Leader of the Congress in the Lok Sabha Adhir Ranjan Chowdhury on Wednesday accused the government of using "suppressive" tactics against the media.

He alleged during the Zero Hour that the government was "undemocratic" and suffered from "megalomania", claiming that it used its advertisement measures to pressure the media.

Speaker Om Birla asked the next member to raise his issue during the Zero Hour, prompting Congress members to protest as Chowdhury wanted to speak further.

Among other issues, Manish Tewari of the Congress asked the government to make its stand clear on the US decision to withdraw its waiver to India to import crude oil from Iran, saying it may have a far-reaching impact on India and lead to rise in prices of oil products.

Will the government continue to import oil from Iran or not, he asked.

Gurjeet Singh Aujla of the Congress asked the government to do away with the steep rise in duties on Pakistani products, saying it has led to joblessness in the border area in his constituency in Amritsar as over 5000 families depended on trade with Pakistan for livelihood.

The duty was hiked after the Pulwama terror attack.

BJP's Nihal Chand targeted the Congress government in Rajasthan over suicide of a farmer in the state. In a video message, the farmer blamed the state government for his decision.

BJP's Rajiv Pratap Rudy expressed concern over India's poor performance in Olympics and suggested that a parliamentary committee be formed as many members have also been keen sportspersons.

He also noted that the next global games are due next year.

BJP's Tapir Gao spoke about several political murders in Arunachal Pradesh. He said one of the cases was handed over to the NIA but no arrest has been made yet.

The government should ensure action, he said.