BJD put up a tough fight against BJP and managed to retain 12 of 21 Lok Sabha seats in the state. 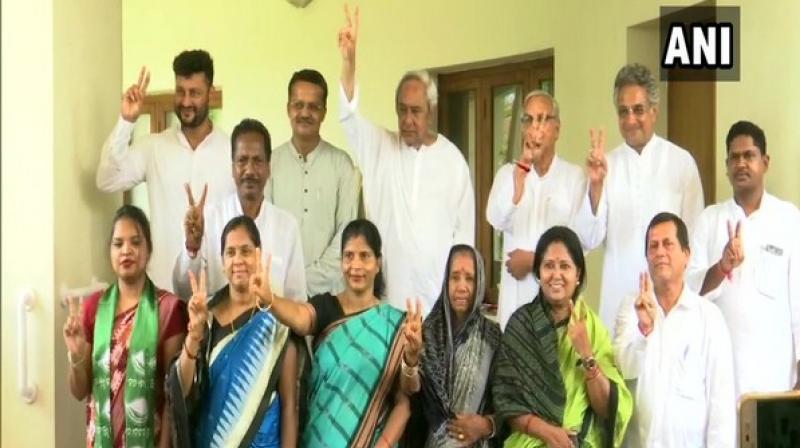 The new legislators held talks with party chief and also posed for a photograph, flashing the victory sign with Patnaik, after the meeting held in Bhubaneshwar. (Photo: ANI)

The new legislators held talks with the party chief and also posed for a photograph, flashing the victory sign with Patnaik, after the meeting held in Bhubaneshwar. The new Cabinet will be sworn in on May 29.

DGP Odisha, RP Sharma said all arrangements for the swearing-in ceremony on May 29 were in place.

"Many dignitaries and VVIPs including the Governor will be present. We have assessed the quantum of force required for the event. We've installed CCTVs and other technologies to ensure foolproof security," said Sharma.

BJD put up a tough fight against Bharatiya Janata Party (BJP) and managed to retain 12 of the 21 Lok Sabha seats in the state.

Patnaik won from two Assembly segments, Hinjili under the Aska Lok Sabha seat in southern Odisha and Bijepur in the Bargarh Lok Sabha seat in western Odisha. While BJP won 8 seats in the state, one went to the Indian National Congress (INC).

Patnaik's party was able to contain the BJP, although, it could not stop the national party from making inroads into its bastion.

Elections for the 147 seats in the Odisha's Legislative Assembly and 21 Lok Sabha seats were held simultaneously in the state.