On February 26, India launched an air strike on terror camps in Pakistan's Balakot. 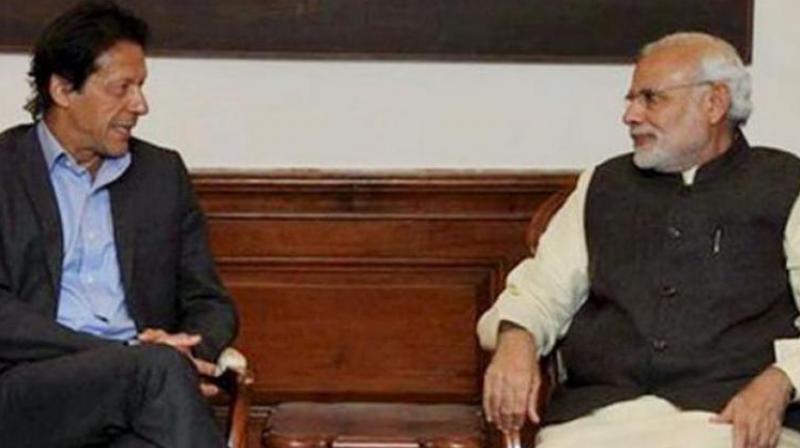 Ahead of the Lok Sabha polls, Khan had said that there might be a better chance of peace talks with India if Prime Minister Modi wins the elections. (Photo: File | PTI)

New Delhi: Prime Minister Narendra Modi on Sunday reiterated the need for "jointly fighting against poverty, creating trust and an environment free of violence and terrorism in the region" when his Pakistan counterpart Imran Khan dialed to congratulate him for his resounding victory in the just-concluded Lok Sabha elections.

Prime Minister Modi on Sunday also received telephone calls from former President of Maldives Mohamed Nasheed, and former Prime Minister of Nepal Madhav Nepal, congratulating him on his victory in the recent General Elections in the country.

"Former President Nasheed congratulated the Prime Minister on the historic mandate and noted that the relationship between Maldives and India had deepened in recent times. He stressed the importance of close cooperation to fight the forces of extremism and radicalisation in the region," added the statement.

"The Prime Minister thanked him for his felicitation and reiterated his commitment to continue fostering a strong, a mutually beneficial and all-round partnership between the two countries for peace, security and development in the region."

"Madhav Nepal warmly congratulated the Prime Minister on leading his party and alliance to a grand, historic and landslide victory. He expressed the confidence that India's emergence as a front-ranking world power would qualitatively uplift the entire region," said the statement.

"Thanking Mr. Nepal for his warm wishes, the Prime Minister expressed his earnest desire to further strengthen and deepen the historically friendly and multifaceted ties between India and Nepal," added the statement.

Pak Prime Minister Khan also expressed his desire that New Delhi and Islamabad will work together for the "betterment of their people."

"PM [Imran] spoke to PM Modi today and congratulated him on his party's electoral victory in Lok Sabha elections in India. PM expressed his desire for both countries to work together for the betterment of their peoples," tweeted Pakistan's Foreign Ministry spokesperson Mohammad Faisal.

"Reiterating his vision for peace, progress, and prosperity in South Asia, the Prime Minister said he looked forward to working with Prime Minister Modi to advance these objectives," he added.

Wishes and greetings poured in from across the world after Modi-led NDA swept the elections and won 352 out of 542 seats in the recently concluded Lok Sabha elections.

Khan had earlier extended his greeting to PM Modi through Twitter. "I congratulate Prime Minister Modi on the electoral victory of BJP and allies. Look forward to working with him for peace, progress, and prosperity in South Asia," he had tweeted.

Ahead of the Lok Sabha polls, Khan had said that there might be a better chance of peace talks with India if Prime Minister Modi wins the elections.

Tension between India and Pakistan had soared after February 14 Pulwama terror attack, killing 40 CRPF soldiers. The responsibility for the attack was claimed by Pakistan-based terror outfit -- Jaish-e-Mohammed.

On February 26, India launched an air strike on terror camps in Pakistan's Balakot.

The next day, Pakistan Air Force planes had tried to attack Indian military installations in Jammu and Kashmir, leading to a dogfight. A MiG 21 aircraft flown by Wing Commander Abhinandan Varthaman had shot down F16 fighter plane of Pakistan during the aerial confrontation.

India too lost the MiG-21 Bison plane and Wing Commander Varthaman was captured by the Pakistan Army after he bailed out and landed on the other side of the border. He was released by Pakistan on March 1.

In a major diplomatic victory for India, JeM chief Masood Azhar was recently declared as a global terrorist by the UN Security Council.