Could request, not demand, PM for special status to Andhra: Jagan Reddy 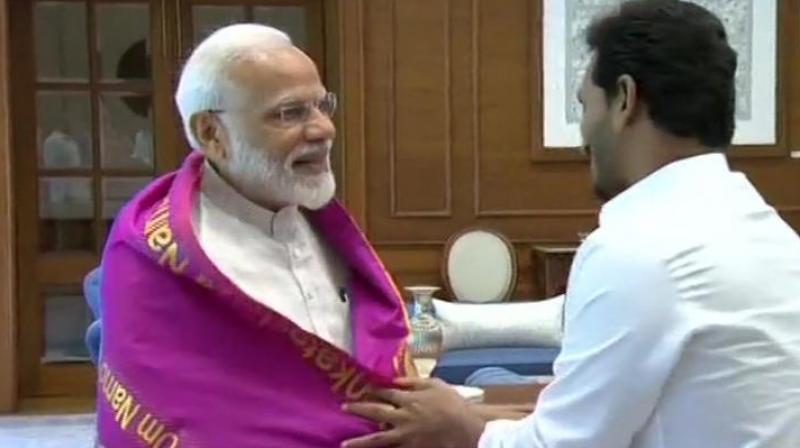 Reddy said he requested the prime minister to be 'magnanimous' towards the people of Andhra Pradesh. (Photo: ANI)

New Delhi: With the NDA sweeping the Lok Sabha election, Andhra Pradesh CM-designate Y S Jaganmohan Reddy said Sunday his party could only request and not "demand or command" the special category status — a lifeline — for the Rs 2.58 lakh debt-ridden state during a meeting with Prime Minister Narendra Modi here.

Reddy, whose party stormed to power on Thursday with a landslide victory in assembly and Lok Sabha polls, said he requested the prime minister to be "magnanimous" towards the people of Andhra Pradesh.

The YSR Congress Party chief also met BJP president Amit Shah and sought his support on the issue. "Today, we might not get it (special category status). We have to be at somebody's mercy but I will remind him (Modi) again and again and someday things will change," Reddy told reporters after meeting Modi at his 7, Lok Kalyan Marg residence.

It would have been a "wonderful moment" for the YSRCP had the NDA won only 250 seats but it got 353 seats in the parliamentary election, he said, adding, "So they don't need us (to form government), they are strong".

"There is very little we can do in demanding and commanding. But yes, we did meet the prime minister and explained to him why special category status is so important for us," Reddy said.

He explained to the PM that the special category status was a "lifeline" for the debt-ridden state as Andhra Pradesh requires funds. PM's support is needed to run the state efficiently, he said.

"Today, the state's debt burden is very high. The debt was at Rs 97,000 crore when the state was bifurcated. In the last five years, our debt has swelled up to Rs 2.58 lakh crore. Our interest repayment alone are at Rs 20,000 crore per annum," he said.

The state's principal and interest put together amount to Rs 40,000 per annum. "This is the kind of situation we are in. We did explain to him that this being the situation, we need a lifeline from you," he said, adding that the special status is the state's "right" and he stops fighting for it no one else would take interest in it.

Reddy said he was happy that the prime minister gave a patient hearing to him. "He listened to the whole thing and was positive. That's a good sign. From here, we are hoping that things would come out positively in better shape," he said, adding he will continue to press his demands with Modi on the issue of the special category status.

"Every time I meet him, I will definitely make it a point to remind him of the issue. Will remind him this was the word given on a floor of Parliament," he said.

The special category status is a major demand of the YSRCP and Reddy, during his election campaign, had said he would support the party at the national level which promises to grant the status to Andhra Pradesh.

Reddy also mentioned, "he met the BJP President, the second-most powerful person in the country, to seek his support for the state's key demands."

In his meeting with Telangana Chief Minister K Chandrashekar Rao Saturday, Reddy said he sought his support on the special status demand in Parliament and also talked about having friendly ties between neighbouring states to resolve the issues pending after bifurcation.

He also said he will complete Polavaram irrigation project in the state and probe if there's any scam in it.

He said he will also order an investigation to unearth possible scams in building the state new capital Amaravati and into government schemes launched by former Chief Minister N Chandrababu Naidu.

The YSRCP chief said he invited the prime minister and the BJP chief to his swearing-in on May 30 in Vijayawada. The YSRCP chief also interacted with officials at Andhra Bhawan.

On Saturday, he was unanimously elected as the leader of YSRC legislature party. Reddy's party has won 151 of the 175 assemblies and 22 of the 25 Lok Sabha seats in Andhra Pradesh, the elections for which were held on April 11.