The Prime Minister later tweeted that he was “grateful for the warmth and affection” shown by the people of Kashi. 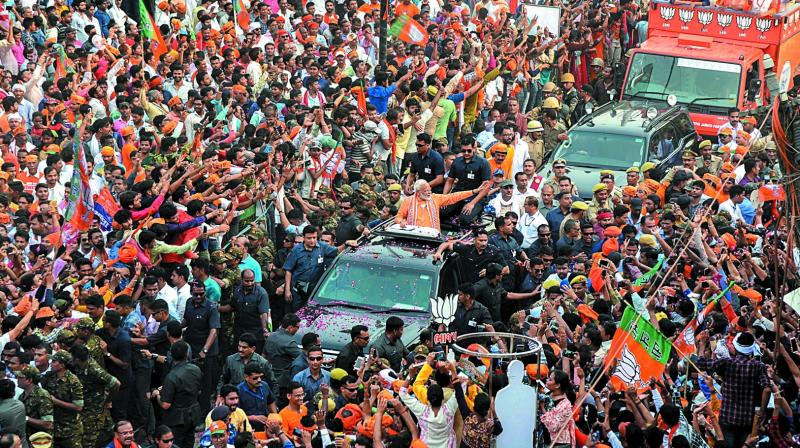 Prime Minister Narendra Modi waves at supporters during his roadshow a day ahead of filing his nomination papers for the Lok Sabha polls in Varanasi on Thursday. (Photo: PTI)

Varanasi: A day before filing his nomination from Varanasi, Prime Minister Narendra Modi on Thursday led a mega roadshow in his Lok Sabha constituency with thousands lining the streets of the “city of temples” and chanting “Modi, Modi”.

The roadshow ended at the Dashashwamedh Ghat where the Prime Minister performed Ganga Aarti along with BJP president Amit Shah to seek blessing for winning Varanasi again and recapturing power at the Centre.

The Prime Minister, wearing a saffron kurta and scarf, was cheered by a massive crowd along the seven-km route of the roadshow, while Uttar Pradesh chief minister Yogi Adityanath and other senior BJP leaders joined his cavalcade.

The show of strength by the Prime Minister took place on a day the Congress ended all speculation about its general secretary Priyanka Gandhi Vadra taking on Mr Modi in the city and re-nominated Ajay Rai who had finished third on the seat in 2014.

Raising the issue of global terrorism in his address to a group of intellectuals, Mr Modi said that India held the mega Kumbh Mela but no terrorist dared to attack holy sites in five years.

“If you permit, I will file my nomination from here tomorrow. And will return to thank you all after winning,” said Mr Modi.

“I want to assure you all that this Chowkidar will never let Kashi’s dignity get harmed at any cost,” he said, targeting rivals for questioning what he had done for Varanasi.

Taking “I want to tell you all what Kashi has changed in me. I am glad that I was able to get associated with the Vedic knowledge of the city and was able to take it forward. It not only helped in my social life, but also political,” Mr Modi said.

He said Tulsidas, Sant Ravidas, Kabir and Ramanand drew inspiration from Kashi’s religious beliefs and that he is indebted to the city forever as the inspiration of trust, justice non-violence and knowledge enabled him to stand up to these values globally.

The Prime Minister later tweeted that he was “grateful for the warmth and affection” shown by the people of Kashi.

Mr Modi started his roadshow from the campus of the Benaras Hindu University by paying respects at the statue of Madan Mohan Malviya at a specially constructed stage in front of the main gate of the varsity. The rally was originally to start at 3 pm, but was delayed by over two hours.

BJP supporters braved the scorching sun and shouting the slogan, “Chappe, chappe se udi pukaar, phir ek baar Modi sarkar (Modi government once more is the demand everywhere)” as the Prime Minister waved at the crowd from the sunroof of his vehicle.

Asked if the SP-BSP-RLD combine will dent the BJP’s prospects in UP, Sanjay Upadhyaya, a resident of Madanpura, said, “Woh log TV par he milae hain, unke dil nahin mile (They have come together only on TV, their hearts are still miles apart).”

In the evening people thronged the Dashashwamedh Ghat ghat even as Mr Modi and BJP supporters were seen blowing conch shells and beating drums on boats, which were decked up with party flags and its election symbol, the lotus.

At the Bundiparkota Ghat nearby, a painting of IAF’s pilot Abhinandan Varthaman and Balakot airstrikes was on display, highlighting the BJP’s nationalism plank.

Mr Modi is on a two-day visit to his parlimentary constituency and is scheduled to file his nomination on Friday in the presence of NDA leaders.

On Friday, the Prime Minister will address booth heads and party workers at 9.30 a.m. and go on to worship the city god Kal Bhairav at 11 a.m.

“At 11.30 am, PM will file his nomination for Varanasi Lok Sabha seat,” said a BJP press statement.

After Varanasi, Mr Modi is scheduled to visit is Ayodhya on May 1. He will address a campaign rally in Ayodhya, which keeps cropping up along with the polarising issue of Ram Mandir, ahead of crucial polls.