Slamming the Prime Minister, the SP chief said the BJP will not be able to talk about their performance. 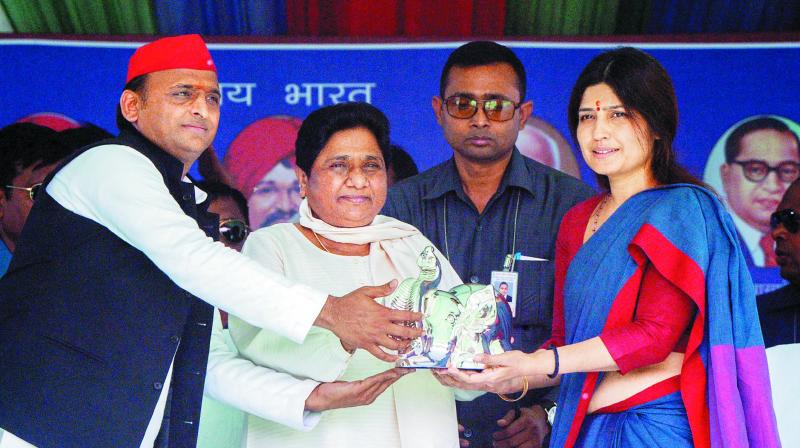 Kannauj (UP): Samajwadi Party chief Akhilesh Yadav Thursday expressed confidence that the SP-BSP-RLD alliance in Uttar Pradesh will give a new prime minister to the country.

He was addressing a joint rally here with BSP supremo Mayawati and RLD president Ajit Singh. “This alliance will give a new prime minister to the country,” Mr Yadav said.

Slamming the Prime Minister, the SP chief said the BJP will not be able to talk about their performance. “So, how can they face the SP-BSP-RLD alliance,” he asked.

The alliance has been formed with an aim to ensure social justice and take the ideals of BR Ambedkar, Ram Manohar Lohia, Kanshiram and ‘Netaji’ (Mulayam Singh Yadav) forward, he said.

On Monday, he had said that regional parties will get more seats than the Congress and the BJP in the ongoing Lok Sabha polls.

Lashing out at the BJP, Bahujan Samaj Party supremo Mayawati Thursday said this Lok Sabha election will see the end of those who chant “NaMo, NaMo”.

“This election will see the end of those chanting ‘NaMo, NaMo and pave the way for those who raise Jai Bheem. Seeing your response it appears you are going to ensure the victory of alliance candidates,” she said.

Prime Minister Narendra Modi is often referred to as ‘NaMo’ by his supporters.

Dimple Yadav, the sitting SP MP from Kannauj and wife of Akhilesh Yadav, is seeking re-election from the seat as the joint candidate of the SP-BSP-RLD alliance.