'Bharat Bandh': Rail, road transport likely to be affected in parts of country 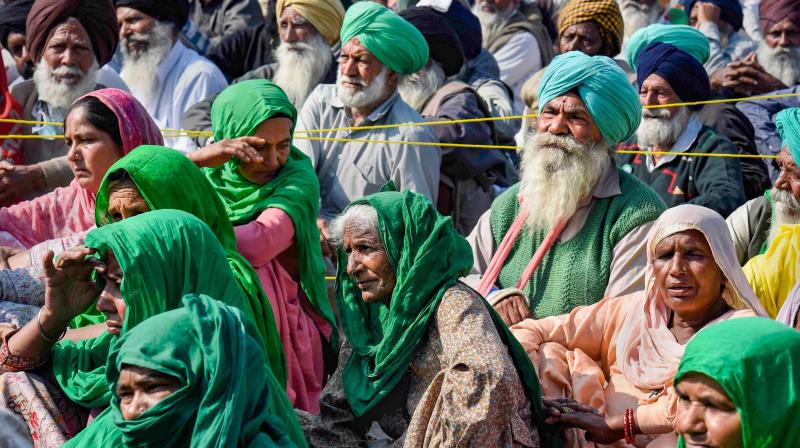 According to the Samkyukta Kisan Morcha, the nationwide shutdown will start at 6 am and it will be in force up to 6 pm across the country on March 26 which marks four months of the farmer agitation at Delhi's three borders -- Singhu, Ghazipur and Tikri. (Photo: PTI)

New Delhi: Rail and road transportation services are likely to be affected and markets may remain closed in parts of the country on Friday as farmer unions protesting against the three agri laws have called a complete 'Bharat Bandh', even as it will not be observed in four poll-bound states and Puducherry.

According to the Samkyukta Kisan Morcha, the nationwide shutdown will start at 6 am and it will be in force up to 6 pm across the country on March 26 which marks four months of the farmer agitation at Delhi's three borders -- Singhu, Ghazipur and Tikri.

In a video message, SKM leader Darshan Pal said that supplies of vegetables and milk will also stopped by the protesting farmers.

The Samkyukta Kisan Morcha, an umbrella body of protesting unions, appealed to protesting farmers to be peaceful and not get involved in any kind of illegitimate debate and conflict during the 'bandh'.

"All shops, malls, markets and institutions will remain closed under complete Bharat Bandh. All minor and big roads and trains will be blocked. All services will remain suspended except for ambulance and other essential services. The effect of Bharat Bandh will be observed inside Delhi as well," SKM said in a statement.

The Morcha said that the 'bandh' will also be observed in the national capital.

Rajewal said that trade unions from organised and unorganised sectors, and transport and other associations have extended their support for the 'Bharat Bandh' call of farmer organisations on March 26.

He said that however, emergency services like ambulance and fire will be allowed during the nationwide shutdown.

Thousands of farmers, mainly from Punjab, Haryana and western Uttar Pradesh, have been camping at Singhu, Tikri and Ghazipur demanding a complete repeal of the three farm laws and a legal guarantee for the minimum support price on their crops.

Confederation of All India Traders, which claimed representation of eight crore traders in the the country, said that markets will remain open on March 26 as it is not participating in the 'Bharat Bandh'.

"We are not going to participate in 'Bharat Bandh' tomorrow. Markets will remain open in Delhi and other parts of the country. The ongoing deadlock can be resolved only through dialogue process. There should be discussions on amendments in the farm laws that can make existing farming profitable," CAIT's national general secretary Praveen Khandelwal told PTI.

Farmer leader Abhimanyu Kohar, who is also senior member of Samkyukta Kisan Morcha, said that the major impact of the 'Bharat Bandh' will be felt in Haryana and Punjab.

Kohar said that farmers have appealed to trader associations to close their shops during the nationwide shutdown as the three new agri laws will also affect them indirectly.

The farmer leader said that in poll-bound Tamil Nadu, Assam, West Bengal, Kerala and Puducherry, the Samkyukta Kisan Morcha has appealed to people to not observe 'Bandh' there.

Apart from repealing of three farm laws, the demands of protesting union include cancellation of all police cases against farmers, withdrawal of electricity bill and pollution bill and reduction in prices of diesel, petrol and gas.

So far, there have been 11 rounds of talks between the protesting unions and government, but deadlock continued as both sides stuck to their stand.

In January, the government had offered to suspend the farm laws for 12-18 months, which was rejected by the farmer unions.