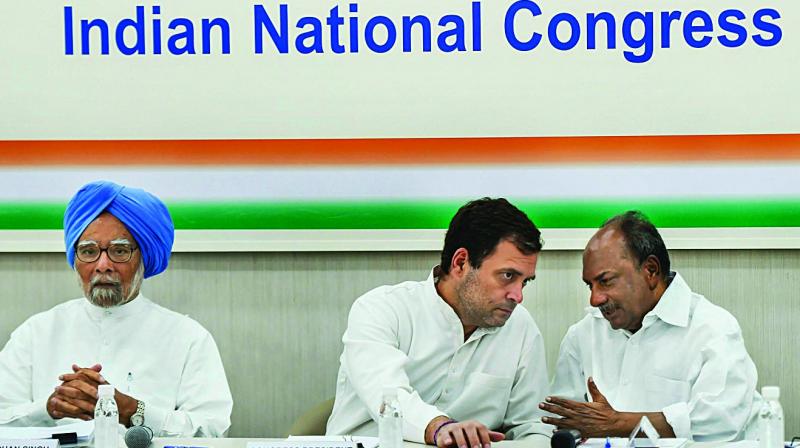 New Delhi: The Congress has promised the minimum support price (MSP) on various crops, which would be fixed on the basis of the formula suggested by professor M.S. Swaminathan, as well as offer a farm loan waiver if it is voted to power in the 2019 Lok Sabha elections.

The grand old party also promised houses for the poor measuring 500 square feet, and a uniform Goods and Services Tax (GST) rate of 18 per cent across the country with the removal of criminal liability against defaulters, among the other major sops.

These are some of the key promises listed in its manifesto for the forthcoming elections, which is to be released by the end of this month, and the details of which have been accessed by this newspaper exclusively.

The Congress-led United Progressive Alliance government in 2004 had formed the National Commission on Farmers (NCF) led by Prof Swaminathan, which in its report submitted to the Centre on fixation of MSP for various crops in October 2006, had suggested that the MSP for all crops should be at least 50 per cent more than the weig-hted average cost of production.

“The net take-home income of farmers should be comparable to those of civil servants,” the NCF report had recommended.

Under the formula suggested by Prof Swaminathan, the calculation of MSP was Cost (C2) + at least 50 per cent more than weighted average cost of production.

Prof Swaminathan had backed the formula with the logic that in most states, C2 (which is the cost of production per quintal) is not covered by the MSP offered to farmers for their produce. Therefore, he had said that it was empirical that MSP should be a combination of C2 plus a 50 per cent increase in weighted average cost of production.

The Narendra Modi-led NDA government had rejected the C2 formula, and finance minister Arun Jaitley had announced in the budget for 2018-19 that the Centre had decided to keep the MSP for the all unannounced kharif crops at least at one and half times of their production cost.