Assuring people of development, he urged them to send him a message directly and he will ensure action. 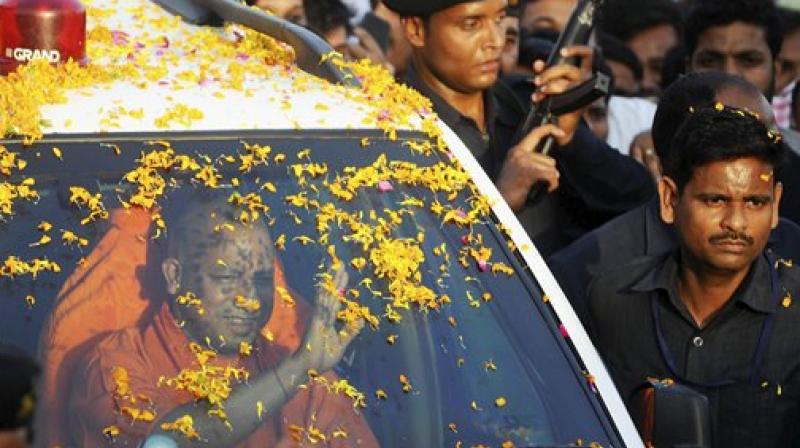 UP Chief Minister Yogi Adityanath arrives at his native place in Gorakhpur, first time after he became CM on Saturday. (Photo: AP)

Gorakhpur: Uttar Pradesh Chief Minister Yogi Adityanath on Sunday asked all BJP office bearers and public representatives not to undertake any contractual work and instead monitor them for effective execution.

He said BJP’s unprecedented win the recent Assembly elections had only increased the responsibilities of the party and its workers.

“No office bearer of the party or any public representative should undertake any contractual work (thekedaari). They should rather monitor them. And, if they find any discrepancy, they can inform me, so that action could be taken immediately against the guilty,” he said.

Addressing people at the BJP’s regional office on the second day of his Gorakhpur visit, he said, “After victory, a number of important works have to be accomplished. The people of the state have reposed their faith in us, and the onus is on us to meet their expectations, while ensuring accountability of our actions.”

Adityanath also laid stress on sense of responsibility and accountibility among his ministerial colleagues.

“I am the CM. (Surya Pratap) Shahi ji is Cabinet minister. But the post of CM or Cabinet Minister is not meant for flaunting. In fact, it is an indicator of one’s responsibility and accountability towards the public, which elected you with an overwhelming majority,” he said, pointing towards some ministers present in Gorakhpur.

The Uttar Pradesh Chief Minister, who is still the local MP, urged the party to gear up for the 2019 Lok Sabha elections.

“In the next two years, you have to work tirelessly, irrespective of the fact that there is sunshine, rain or biting cold. Efforts should be made to ensure that the welfare schemes of the Centre percolate to the last strata of the society, and needy people are able to avail its benefits,” he said, amidst a thunderous applause from the audience. Underscoring the need for improved work culture, the Uttar Pradesh Chief Minister also said people who were prepared to work for 18-20 hours a day are “most welcome” to join him, the rest are free to leave.

“Time has come that we should work 18-20 hours a day. There no time for any entertainment (mauj masti),” he said.

He also urged the people to help him break the negative image of UP.

“For the past few years Uttar Pradesh has been defined as a state from whose boundaries begin darkness, from where the pot-holed roads begin and the place from where the women start to feel insecure. I was to break this mindset,” he said, and added that he wants to make UP a place, where women feel safe and secure.

Yogi Adityanath said, “I would like to assure that in the next two months, people would come to know how a state government should work. I have got an opportunity to clean the mess (kachdaa saaf karne kaa maukaa milaa hai), and I will do it.”

He also advised his ministers that they should be accessible to the public. “The doors of your house and office must remain open to the public. This would ensure that the government is able to reach to the last person of the society. No one would go to bed empty stomach and money would not be a constraint in marriage of any girl,” he said.

Referring to the acid attack on a woman from Rae Bareli, CM Adityanath, said, “The officials are working on ‘puraanaa dharraa’ (old style). I went to KGMU to inquire about the well being of the woman and gave them ultimatum that everything must be done in the next couple of hours.”

He also referred to the Agra loot, which was worked out.

“There is no place for those who give patronage to the gooda elements, mafia, criminals and other rogue elements. They have the option of leaving UP or else they would land in places designated for them (jails),” he said, while hinting at massive revamping of law and order.

He also talked about people committing electricity theft facing the music. “The situation has already improved in Gorakhpur and it would soon improve in the state as well,” he said.

“If you find any discrepancy or anomaly, just message me the relevant details. I will ensure action,” he said.