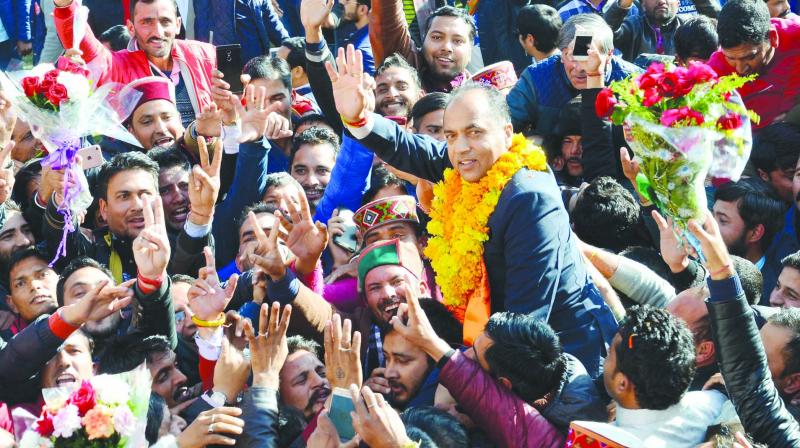 New Delhi: Ending days of suspense, the BJP on Sunday named five-time MLA, Jai Ram Thakur, 52, as the next chief minister of Himachal Pradesh where the party won 44 out of 68 Assembly seats in the recently-concluded election.

The BJP took six days, after the results were announced on December 18, to pick Mr Thakur, Seraj MLA and a former state Cabinet minister, for the top post after its chief ministerial nominee Prem Kumar Dhumal suffered a shocking defeat and there were signs of friction between various party factions during selection of a chief minister candidate.

Jai Ram Thakur will be the 14th chief minister of Himachal Pradesh and is likely to be sworn-in on December 27 at a star-studded ceremony expected to be attended by Prime Minister Narendra Modi and BJP chief Amit Shah, among others.

Most of the newly-elected BJP MLAs backed Mr Thakur’s name for the top post in the legislature party meeting held in Shimla in the presence of party’s Central observers — Union ministers Nirmala Sitharaman and Narendra Singh Tomar.

Having an RSS lineage, Mr Thakur is a Rajput, a numerically dominant caste in the state.

After his name was officially announced as the next CM of the hill state, the chief minister-elect along with the party’s central observers and other leaders met governor Acharya Dev Vrat to stake claim for government formation.

Addressing the media,  Mr Thakur  thanked all BJP leaders. “I thank all legislators for supporting my candidature... We waited for Congress Mukt Himachal, now our dreams have come true.... I want to thank Prem Kumar Dhumal ji who proposed my name supported by J.P. Nadda, and Shanta Kumarji,” said the CM-elect.

Sources disclosed that though Mr Thakur’s name was announced at the legislature party meeting in the afternoon in Shimla, he had earlier received a call from the party top brass in the morning about his name being finalised.  Mr Shah, sources said, held a meeting on late Saturday night to deliberate on mainly two names — Mr Thakur and former CM and party stalwart P.K. Dhumal. Central observers had submitted a report after meeting state leaders and RSS leadership in Shimla earlier this week. Mr Shah had then apprised Mr Modi about the issue.

While a majority of BJP-RSS cadre was backing Mr Thakur’s name for the top post,  a section within the state unit was also lobbying hard for Mr   Dhumal.

Though Mr Nadda’s name was also doing the rounds for the top post, the saffron cadre and senior state leaders were in favour of picking the new chief minister from among the newly-elected MLAs.

Sources disclosed that Mr Thakur’s name was also finalised as the central leadership was in favour of promoting a second-generation leader in the state.

Mr Thakur comes from the Mandi region, which till today has never had any saffron party chief minister in the state.

The chief minister had created major rift within the BJP state unit with   supporters of both Mr Thakur and Mr Dhumal clashing outside the venue of a meeting of central observers in Shimla.

To present a united face and undo the harm done by the factional fight, the  party leadership had suggested that Mr  Dhumal and Mr Nadda should be present in the legislature party meeting.

Mr Thakur had joined the RSS affiliated student’s outfit, ABVP, during his college days and completed his MA from Panjab University. He had won his first assembly election in 1998 from Mandi. Mr Thakur was also the minister of rural development and panchayati raj from 2007-2012. He was the BJP state president from 2007- 2009.