'PM is worried about the election results and talks with hatred everywhere he goes. The Prime Minister is weak,' he said. 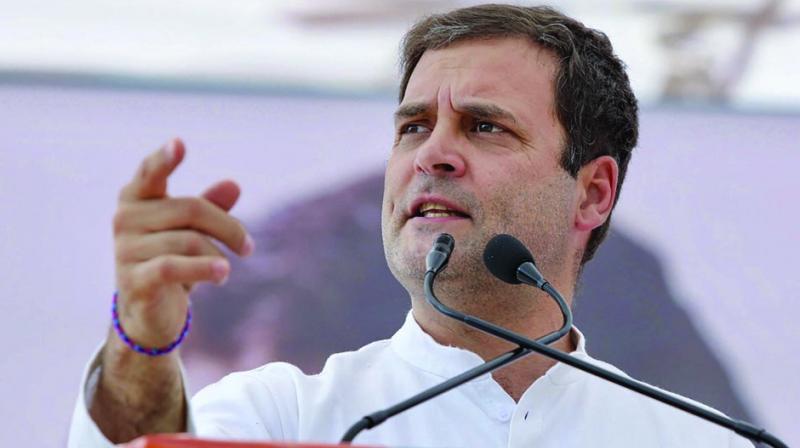 The state will go to polls to elect legislators for its 230 constituencies on November 28. Results will be declared on December 11. (Photo: PTI)

Damoh: With only three days left for Madhya Pradesh to go to polls, Congress president Rahul Gandhi on Saturday said Chief Minister Shivraj Singh Chouhan speaks with decency, while Prime Minister Narendra Modi lacks it whenever he attacks the Congress.

Addressing a rally in Damoh, Gandhi said although Chouhan is aware that he is contesting this election only to lose, there is no hatred in his words.

"Shivraj Singh has realised that he is fighting this election to lose, but there is no hatred in him. However, the other person (Prime Minister) is worried and he talks with hatred everywhere he goes. The Prime Minister is weak," the Congress Chief said.

Continuing his tirade against the Prime Minister, the Congress president said that people have lost their faith in the former.

"He (Prime Minister Modi) knows that he is going to be defeated in 2019. This has caused hatred in his heart. Wherever he is going, he is talking with hatred and anger. This fear is converting into hatred. The entire country is watching," he added.

The state will go to polls to elect legislators for its 230 constituencies on November 28. Results will be declared on December 11.

While the Bharatiya Janata Party (BJP) will look to extend its 15-year rule in the state, the Congress is in a bid to regain power in Madhya Pradesh.

The election will be considered as a direct political battle between the BJP and the Congress. While the incumbent chief minister will try to win the post for a consecutive fourth term, the Congress will fight for gaining power after 2003.