160 votes in favour; BJP walks out, Speaker quits amid drama 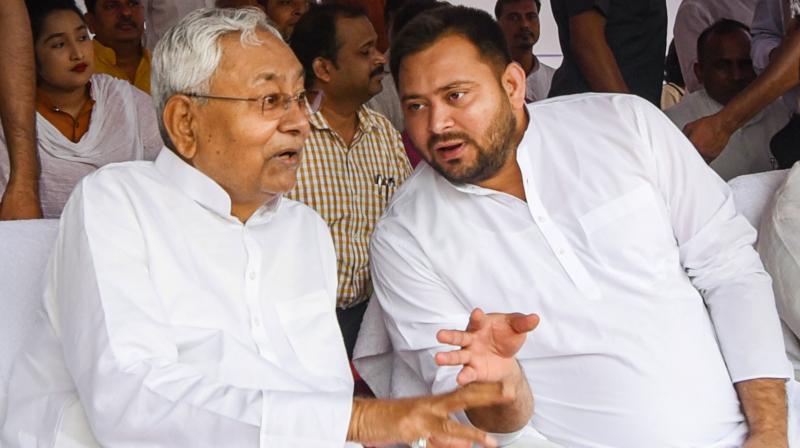 The Mahagathbandhan of seven political parties led by chief minister Nitish Kumar on Wednesday won the trust vote in the Bihar Assembly. (PTI)

Patna: The Mahagathbandhan of seven political parties led by chief minister Nitish Kumar on Wednesday won the trust vote in the Bihar Assembly. A total of 160 MLAs voted in favour of the confidence motion moved by the new government while no votes were against it as the Opposition BJP staged a walkout during Nitish Kumar’s speech.

Earlier in the day, Assembly Speaker Vijay Kumar Sinha resigned from the post amid a huge political drama. He announced that JD(U) leader Narendra Narayan Yadav would preside over the session instead of deputy speaker Maheshwar Hazari.

The action was, however, called “unconstitutional” by parliamentary affairs minister Vijay Kumar Chaudhary. As the House convened again in the second half, deputy speaker Maheshwar Hazari was welcomed by the Mahagathbandhan and he presided over the trust vote in the Assembly.

“I convened the House in an impartial manner for 20 months with the support of all the members from both the treasury and opposition. I hope this would continue in future also”, Mr Vijay Kumar Sinha said before announcing his resignation from the post on Wednesday.

Ahead of the trust vote, chief minister Nitish Kumar called for a united Opposition to take on the BJP at the Centre in the Lok Sabha elections in 2024. He said: “We are together now and have taken a pledge to work for the development of Bihar. Many people called to congratulate me after I formed this alliance but I urged them to unite and fight together to win the next Lok Sabha election”.

He added that “the country cannot progress on false promises and narratives. Some people are only interested in fanning hatred between Hindus and Muslims. These are the people who don’t want to spare even Bapu, as they had no role in the freedom struggle. But we have come together and will fight against all this”.

During the debate on the motion, Mr Nitish Kumar said that the “Central government wanted to take the credit of all the state government’s scheme”. He went on to target the BJP MLAs by saying that the “Har Ghar Jal” scheme was also the state government’s scheme which the Centre tried to hijack. He said: “Even the scheme for roads in rural areas was launched during Atal Behari Vajpayee’s time. All of you present in the House today must take note of these things. Few of you were not there and may not know. The Centre doesn’t deserve credit for these schemes”.

During his speech, Nitish Kumar hinted that after joining hands with the BJP in July 2017, he was not comfortable. He also reminded the BJP that his party JD(U) in the 2005 and 2010 Assembly elections won more seats than the BJP.

During his speech in the Assembly, Nitish Kumar went on to say that he had nothing against the BJP in Bihar but some of their senior leaders like Sushil Kumar Modi, Prem Kumar, Nand Kishore Yadav and Vinod Narayan Jha were sidelined in their party despite having a good rapport with him.

“These leaders had a good rapport with me but after they got sidelined by their party during the formation of the government I thought that they were up to something. Even then I did not do anything but took the step after the situation became difficult for me”, Mr Kumar said.

He said that “veteran leaders like Atal Behari Vajpayee and L.K. Advani” had treated him “with respect”, and added that he had snapped ties with the BJP in 2013 after “they were sidelined in the party”.

Mr Nitish Kumar had cut off the JD(U)’s ties with the BJP-led NDA on August 9 and announced his alliance with the RJD, Congress and other Opposition parties in Bihar on August 10.

In the current scenario, Nitish Kumar has the support of seven political parties and 164 members in the 243-member Assembly. The Opposition BJP has 77 seats in the House.