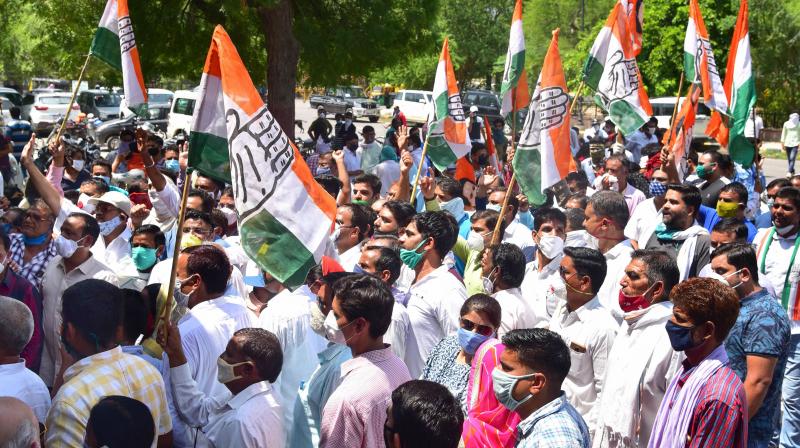 Ongoing political crisis in Rajasthan continued on Saturday as Congress workers staged demonstrations against the BJP, accusing it of "conspiring" to topple the Ashok Gehlot government, while the state Cabinet met at the Fairmont Hotel in Jaipur to discuss revising a proposal requesting Governor Kalraj Mishra to convene a session of the Assembly.

As per sources, the party had also held a meeting on Friday to discuss the points raised by the governor with regard to calling the Assembly session.

The Governor had asked the Ashok Gehlot government why it wanted to call an Assembly session to secure a vote of confidence if it already had the majority.

The governor posed the query in a six-point questionnaire entailing a note sent by the Raj Bhawan to the state Parliament Affairs Department, the Raj Bhawan said in a statement.

PROTESTS ACROSS THE STATE

The Congress had on Friday given the call for demonstrations in all district headquarters against the "conspiracy to murder democracy" and to press the governor for convening an Assembly session.

The Congress government is pushing for a session of the Assembly so that Chief Minister Ashok Gehlot can prove his majority on the floor of the House after the Rajasthan High Court on Friday ordered that status quo should be maintained on the disqualification notices sent out by the Speaker to rebel leader Sachin Pilot and 18 other MLAs.

"The BJP's intentions will not work out and the Ashok Gehlot government will complete its tenure. It is also disappointing that the Governor is not calling an Assembly session. The session should be called,” a party leader said in Bikaner.

Congress workers took out a rally in Kota and staged a dharna in Jodhpur. In Jaipur, the demonstration was held at the Youth Congress office.

SOCIAL DISTANCING GOES FOR A TOSS

Giving the call for demonstrations, state Congress president Govind Singh Dotasara had on Friday said the programmes would be held following COVID-19 preventive measures such as social distancing. He said that not more than 50 persons would gather in any place.

However, Congress workers gathered for the demonstrations in large numbers in all district headquarters disregarding social distancing norm.

Meanwhile, attacking Gehlot for staging a 'dharna' at the Raj Bhawan, Union Minister Gajendra Singh Shekhawat said in a state where the chief minister himself makes the governor "feel unsafe", it is futile for people to plead to him for their safety.

Accusing Mishra of acting under pressure to not call an assembly session, Gehlot along with several Congress MLAs had staged a sit-in at the Raj Bhawan in Jaipur on Friday. They ended their five-hour sit-in after an assurance from the governor that he will go by the constitutional provisions on summoning an assembly session.

"Where the chief minister himself makes the governor feel unsafe by threatening him, it is futile for the people of Rajasthan, who are reeling under incidents of robbery, violence, rape and murder, to plead to the chief minister for safety their safety," Shekhawat said in a tweet in Hindi.