The Congress-JD(S) coalition government fell on Tuesday as it lost the trust vote in the Assembly. 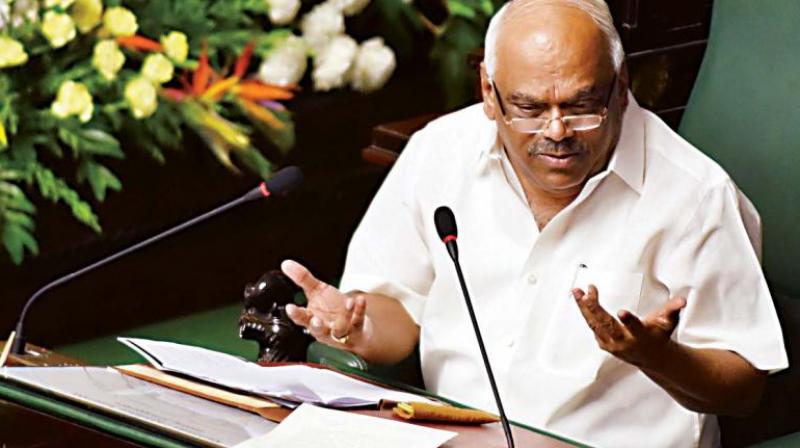 Answering a question on the criteria under which the resignations will be accepted, the Speaker said that it is all laid down in the law and accordingly the decision will be taken. (Photo: File)

Bengaluru: Karnataka Assembly Speaker K R Ramesh Kumar on Thursday said that he is still looking into the resignations submitted by rebel MLAs belonging to Congress and JD(S).

"I cannot discuss the judicial proceedings with the media but I am still going through the resignations. I respect Supreme Court very much. They have given me the discretion and I will live up to their expectations," he said.

Answering a question on the criteria under which the resignations will be accepted, the Speaker said that it is all laid down in the law and accordingly the decision will be taken.

"I don't know. The trust vote has been put (to vote) and with the rest, I have nothing to do with it," he said on senior Karnataka BJP leaders meeting Home Minister Amit Shah today in Delhi.

A Karnataka BJP delegation met with Home Minister Amit Shah in Delhi to discuss the future course of action in Karnataka. Among those present at the meeting were Jagadish Shettar, Basavaraj Bommai, Arvind Limbavali and J C Madhuswamy.

Speaking to ANI before going for the meeting, senior BJP leader Aravind Limbavali said, "We are here to take guidance from the central leadership for the formation of the new government. We will discuss the strategies and an action plan."

The Congress-JD(S) coalition government fell on Tuesday as it lost the trust vote in the Assembly. Following the defeat, Kumaraswamy submitted his resignation to Governor Vajubhai Vala at Raj Bhavan, along with his cabinet ministers.

The defeat marked the end of an uneasy coalition that was formed after the assembly polls on May 23, 2018, which returned a hung verdict after three main parties in the state- Congress, BJP and the JD (S) contested against each other in the polls.